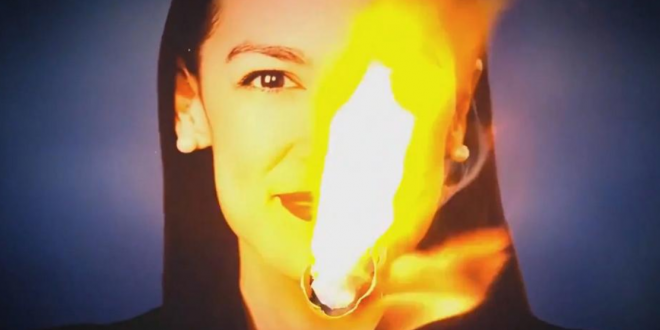 The clip opens with ominous music and a portrait of Rep. Alexandria Ocasio-Cortez (D-N.Y.) bursting into flames to reveal a pile of skulls. “This is the face of socialism and ignorance,” the narrator intones. “Does Alexandria-Ocasio Cortez know the horror of socialism?”

The jarring ad, which aired on ABC during Thursday’s Democratic presidential debate in Houston, compares the freshman Democrat’s support of democratic socialism to the communist Khmer Rouge regime in Cambodia that killed nearly 2 million people in the 1970s.

The ad was produced by New Faces GOP, a PAC that aims to bring “candidate [sic] from all races, ethnicities, gender, or geography” to the Republican Party. The Fresno-based organization is fronted by Elizabeth Heng, who lost in November to Rep. Jim Costa (D-Calif.) in a 16th Congressional District race.

New Faces GOP appears to be purely a Heng-related venture. Of the group’s 22 publicly disclosed donors, Federal Election Commission records show that at least 13 of them also contributed to Heng’s 2018 congressional campaign.

New Faces GOP’s treasurer also ran the finances of Heng’s congressional campaign. The super PAC’s top vendor, Strategic Perception, also produced ads for the campaign. In September 2018, a Wall Street Journal columnist even suggested that Heng could be “an Ocasio-Cortez for the GOP.”

It appears that Heng is eager to elevate that analogy. Thursday’s ad featured an image of Ocasio-Cortez that burns out from the center, imagery that quickly drew a comment from the congresswoman.

Republicans are running TV ads setting pictures of me on fire to convince people they aren’t racist.

Know that this wasn’t an ad for young conservatives of color – that was the pretense.

What you just watched was a love letter to the GOP’s white supremacist case. https://t.co/zvp1EB02c5

Not Republicans. Me. Are you really calling me a racist @aoc? I’m calling all Democrats out for supporting an evil ideology. Or are you just in Congress to hang out with celebrities and tweet out ridiculous ideas like the green new deal? https://t.co/w985LYjIZd

This is the very strange PAC ad featuring a burning pic of @AOC that aired during the #DemDebate: pic.twitter.com/YZcHp0FMTi

@WeAreSinclair, the Sinclair Broadcasting Group, is responsible for the hate-filled, bigoted, death-threat ad against @AOC. Although #BoycottABC is being blamed, this should have been rejected at every level, including @Disney and @ABC. Report Sinclair to the @FBI.

As the morning after breaks, more details are coming to light. ABC- the network- didn’t air the ad. Some local stations did, including the Sinclair-owned affiliate in DC. New reports say at least 2 ABC O&O’s in NY & Houston also ran it. Searching for more details. More to come https://t.co/Z2iL5t3fFi

ABC can go to hell. Running propaganda with a picture of @AOC being set on fire, with dead bodies & skulls in the background, was absolutely despicable. People need to be fired over this. It’s ridiculous & evil. ABC profited off of it, during the #DemDebate. Shame on ABC. Shame. pic.twitter.com/o7msRtQI3J

How the hell did this Elizabeth Heng ad where @AOC’s face is burned up clear ABC network standards and practices?