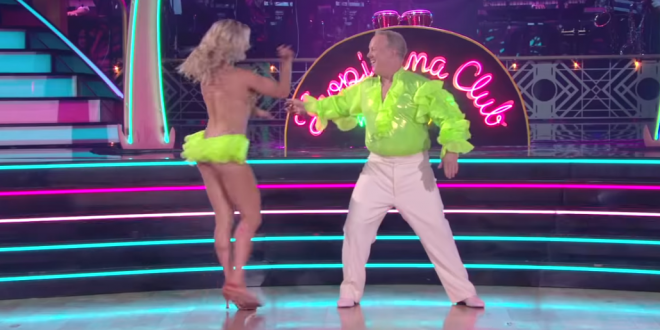 Sean Spicer flashed across the screen in a neon green puffy shirt for his debut on ABC’s Dancing With The Stars — at least he chose a blinding lime over Trump orange.

He danced a salsa with professional Lindsay Arnold to the Spice Girls “Spice Up Your Life,” and while he earned some respect for the judges for being game to doing the show, they scored near the bottom of all of the contestants, scoring 12 out of 30.

“I started off at minus ten,” Spicer said afterward, standing next to Arnold. “She has been a phenomenal coach.” His segment started with him playing the bongos before he went in to the dance moves with Arnold, but it failed to impress the judges. They did give him credit for trying.

“I was Donald Trump’s first White House press secretary,” he said by way of introduction. “There’s no question my time in the White House was tumultuous.”

After a montage of some of the least damning moments from his tenure, Spicer embarrassed himself further by gushing over the tweet Trump put out congratulating him on the reality gig. “It’s nice to have the leader of the free world on your side when it comes to getting votes,” he added.

“What were you doing there?” one of the judges asked when he was done. “It’s like you were being attacked by a swarm of wasps.” The best he could say was that it was “strangely entertaining.”

Wanna create an emotional meltdown in Hollyweird? Vote for @seanspicer to win “Dancing with the Stars” tonight and every night he’s on. @seanspicer is a good guy and a brave sport to go on DWTS. Let’s show him some love! https://t.co/UNI7xXVtwh pic.twitter.com/hlb2LeUFar

A reminder that Sean Spicer lied repeatedly to the American people on behalf of Donald Trump and his administration. No amount of shimmying will change that.

“Spicer lied directly to the American people on behalf of the government, strong-armed the press, cast doubt on the 2016 vote total, and defended Hitler. Now he just wants to have some fun and do a jive” on #DWTS, writes @KPFallon https://t.co/wHPvnmJgSU

Just as a reminder, Sean Spicer thought it was emasculating to be portrayed by Melissa McCarthy on SNL…#DWTS pic.twitter.com/Enmhm4CeL1

Previous CHATTER AWAY: Overnight Open Thread
Next Trump To Hispanic Supporter At New Mexico Rally: Who Do You Love More, The Country Or Hispanics? [VIDEO]