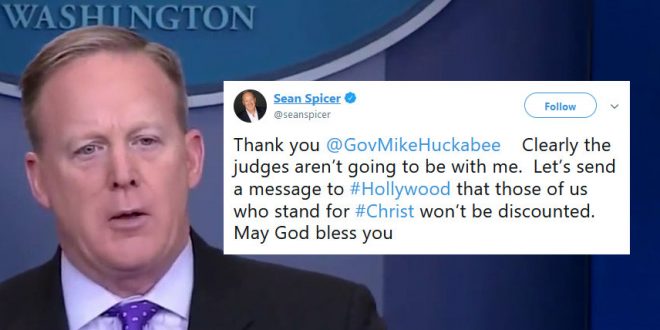 According to former Trump White House Press Secretary Sean Spicer, the power of Christ compels you… to help him win ABC’s Dancing with the Stars.

On Monday night, Spicer made his debut on the hoofing-with-has-beens competition show, scoring an apparently unimpressive 4 from the judges for his Spice Girls-fueled routine during which he skillfully managed not to defend Hitler.

Recognizing the seriousness of the moment, however, Spicer reframed the dance competition as the struggle between Satan and the heavens that it clearly is.

Thank you @GovMikeHuckabee Clearly the judges aren’t going to be with me. Let’s send a message to #Hollywood that those of us who stand for #Christ won’t be discounted. May God bless you https://t.co/Qqa9xi3pIM

I talked to Jesus this morning.

He doesn't think you are a very good dancer.

He also says you should lay off the Grey Goose.

This is a low blow even for right wing hypocrites. @SeanSpicer was clearly horrible and unqualified to receive a good score so now he is invoking Christ and trying to get the fake evangelical vote …these people have no integrity whatsoever

You’re on this show because you stood up for a serial adulterer and lied endlessly for him in exchange for pay and power.

Christ had nothing to do with it.