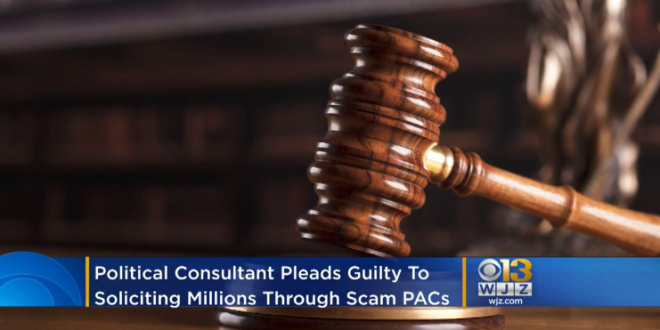 In one of the first Justice Department cases of its kind, Maryland political consultant Kelley Rogers pled guilty to wire fraud today for operating multiple fraudulent political action committees that raised money from donors for conservative causes but kept much of the funds for Rogers and his associates.

Rogers’ arrest and indictment took place shortly after Politico and ProPublica investigated one of Rogers’ PACs, Conservative Majority Fund, which since 2012 has raised close to $10 million — mostly from small-dollar donors, many of them elderly — while giving out just $48,400 to politicians.

Court documents state Rogers raised millions of dollars using “materially false and fraudulent pretenses, representations, and promises” in his solicitations to donors, made up fake bills for the PACs, including Conservative Majority Fund, and made false disclosures about them to the Federal Election Commission.

Our story detailed how Conservative Majority Fund took information it had collected about donors for the American Conservative Union, the famed operators of the annual CPAC conference, and used that information to build a PAC that preyed on those donors fears. While promising to fight Barack Obama and illegal immigration, internal emails and documents showed that Rogers and his associates instead funneled the money back to themselves.

In addition to misleading donors, Rogers also created fake invoices for at least four PACs that he controlled, including Conservative Majority Fund, court documents show. Rogers worked “with others in his inner circle, particularly telemarketing, email and direct mail vendors, to cause the creation of fake invoices.” Rogers would pay the invoices to firms under his control or controlled by associates who would “kick money back” to him, according to the court documents.

“We tried to give the agents all the information they could possibly need,” GOP consultant Kelley Rogers told WaPo after the FBI raided his office in ’17. He pleaded guilty to one count of wire fraud today as a result of a scam PAC scheme. #TFW pic.twitter.com/W9iW0fVVrn