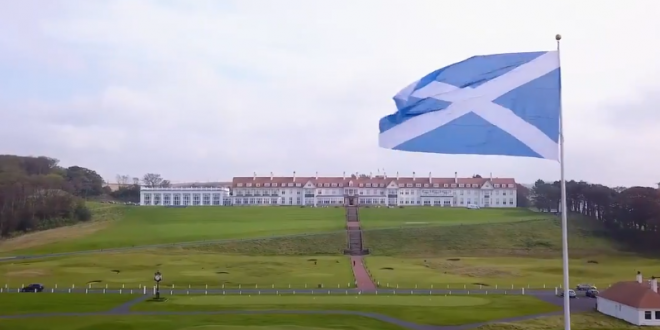 A five-day visit to Turnberry and the surrounding region revealed that the regular visits from Air Force crews on layovers from Prestwick Airport have become a major facet of the life of the resort. It also revealed that, rather than being restricted to single-night refueling stops, some visits last multiple nights, expanding the known dimensions of the relationship between the president’s luxury resort and the U.S. military.

One reason for the multi-night stays, which were described by a half-dozen staffers, is inclement weather that prevents the crews from taking off from the airport 40 minutes up the road. In at least one instance earlier this year, a crew was laid up for multiple nights while their plane underwent repairs, allowing them to hit the links on Turnberry’s world-class course and purchase mementos from the pro shop, where a child’s golf shirt runs 55 British pounds, about $68 at the current exchange rate.

Previous Trump To Hispanic Supporter At New Mexico Rally: Who Do You Love More, The Country Or Hispanics? [VIDEO]
Next Trump Orders Corey Lewandowski To Dummy-Up At Impeachment Hearing, Bars Two Aides From Testifying