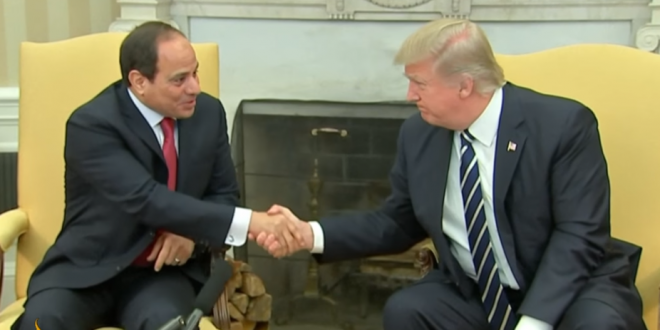 REPORT: Stunned Silence At G7 When Trump Called Out “Where My Favorite Dictator?” To Egyptian President

Searching a room for Egyptian President Abdel Fattah el-Sisi at last month’s G7 summit in France, President Trump called out: “Where’s my favorite dictator?” Why it matters: Sisi really is a dictator, and he really is closely allied with the Trump administration.

Trump is untroubled by the idea of partnering with authoritarians, but his remark was “met by a stunned silence” according to the WSJ, which notes it’s unclear if Sisi was in the room to hear it. When the two leaders met moments later, Trump praised Sisi as a “very tough man” who had “done a fantastic job.”

Even if lighthearted, Mr. Trump’s quip drew attention to an uncomfortable facet of the U.S.-Egypt relationship. Mr. Sisi has drawn criticism for his authoritarian rule since taking power following a 2013 coup.

Under Mr. Sisi, Egyptian authorities have been accused of detaining thousands of political opponents, of torturing and killing prisoners and of stymying political opposition, according to reports by the United Nations, U.S. State Department and nongovernmental groups.

Waiting to meet w/Egypt’s authoritarian president at the G7, Trump called out in a loud voice to the group of U.S. & Egyptian officials: “Where’s my favorite dictator?” His question was met w/stunned silence, per @nancyayoussef @vmsalama @MichaelCBender.https://t.co/EsnQbOt1XY