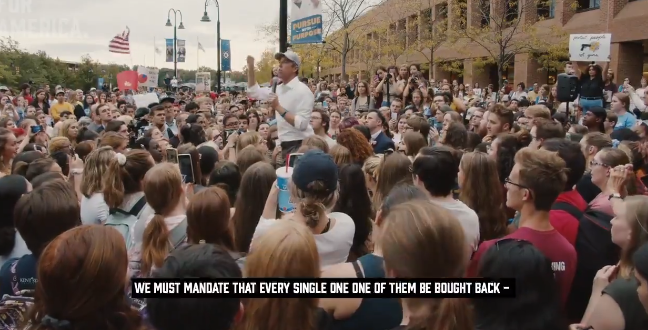 When audience members showed up to former Texas Congressman Beto O’Rourke’s rally at Kent State University carrying assault weapons, he called them out. O’Rourke spoke to a crowd that included gun-toting “open carry” advocates — some of whom were members of the white nationalist Proud Boys — after meeting with a survivor of the 1970 massacre at the school that killed four students.

In the middle of his speech, O’Rourke pointed right at one of them and called out the display. “These weapons of war, which were designed to kill us on the battlefield, but are killing us in schools and synagogues and Walmarts and churches and concerts and gatherings just like these, it is not enough to stop selling AR-15s and AK-47s,” O’Rourke said, as disruptions and heckling could be heard.

Yesterday, people brought assault weapons to our rally at Kent State—where 4 students were shot dead in 1970.

I told them nobody should show up with an AK-47 or an AR-15 to seek to intimidate us in our own democracy.

We need to buy back every single one of them. pic.twitter.com/U7N5fWUlvv

Previous Accrediting Body Looks Into Liberty University Scandal
Next Booker: Some GOP Senators Will Back Impeachment