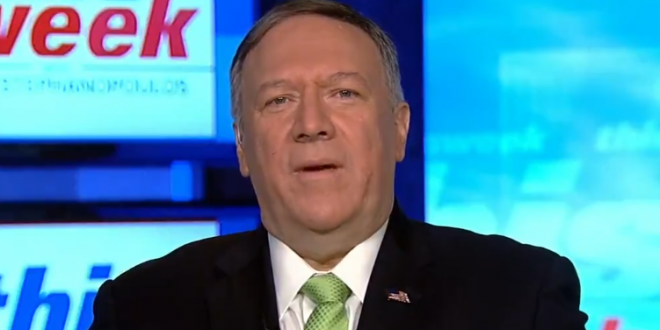 The secretary of state said Sunday’s now-canceled meeting at Camp David was in the works “for a while” and defended Trump’s decision to invite Taliban leaders on US soil.

“It was the case that when the Taliban tried to gain a negotiating advantage by conducting terror attacks inside the country, President Trump made the right decision” to walk away, Pompeo said. “It made no sense for the Taliban to be rewarded for that kind of bad behavior.”

Despite Trump’s statement that he was ending peace talks, Pompeo said the administration is still working toward a deal and was seemingly close to one before Thursday’s bombing in Kabul.

Pompeo’s staff to Sunday show bookers: “Hey, have my boss on and he’ll make news!”
Pompeo to Trump at lunch Friday: “Hey, boss, I’ll be on five Sunday shows touting your wisdom and statesmanship!”
Pompeo today, asked about Trump inviting the Taliban to Camp David: “No comment.“ https://t.co/RbSYWqsuvV

I asked @SecPompeo if he trusts the Taliban, given their July video proclaiming continued support for 9/11 and UN Security Council monitoring team reported that Al Qaeda “considers Afghanistan a continuing safe haven for its leadership.

Jake Tapper Confronts Pompeo: Wouldn’t You Be Upset If a Dem POTUS Invited the Taliban to Camp David? https://t.co/DE7QOPci7K

Tapper: I can’t help but think that if a Democrat talked about having Taliban come to Camp David to negotiate a peace process that was not a done deal that you…would be rather upset?

Pompeo: “Yea, Jake, you’re just wrong about that. I’ve been fully supportive of this effort.”

“If you’re going to negotiate peace, you often have to deal with some pretty bad actors,” Secretary of State Mike Pompeo tells @GStephanopoulos when asked about criticism of President Trump’s now cancelled secret meeting with the Taliban at Camp David. https://t.co/b5eDvvkMaR pic.twitter.com/LSKGULBNp9

Secretary of State Mike Pompeo on Taliban relations: “President Trump will always protect Americans and the American interest, and one of the ways we are trying to do that is take down the violence levels in Afghanistan so we can rebalance” #cnnsotu pic.twitter.com/Z9iO6wbRUV