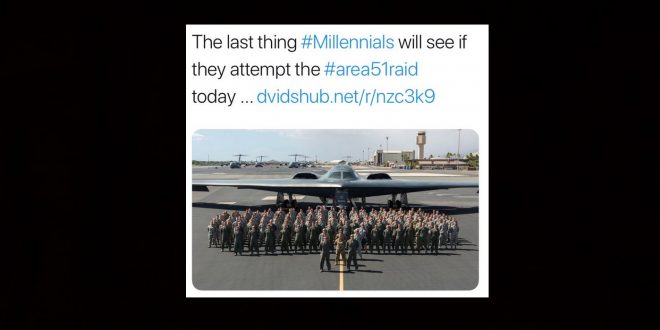 On Friday DVIDSHUB tweeted a picture of a B-2 bomber on the flight line with a formation of airmen in front of it along with the caption: “The last thing #Millenials will see if they attempt the #area51raid today.”

If death is easy and comedy is hard, jokes about wiping out millennials with precision guided munitions are particularly difficult to pull off. The tweet no longer exists online, but Task & Purpose was able to get a screenshot of it before it was deleted.

“Last night a DVIDSHUB employee posted a tweet that in NO WAY supports the stance of the Department of Defense,” DVIDSHUB said in a statement to Task & Purpose on Saturday. “It was inappropriate and we apologize for this mistake.”

As you may recall, on New Year’s Eve the US Strategic Command posted and quickly deleted a tweet about ringing in 2019 with a nuclear bomb.

“The last things millennials will see if they attempted the #area51raid today…” cc @DVIDSHub pic.twitter.com/08pcWhuqm9