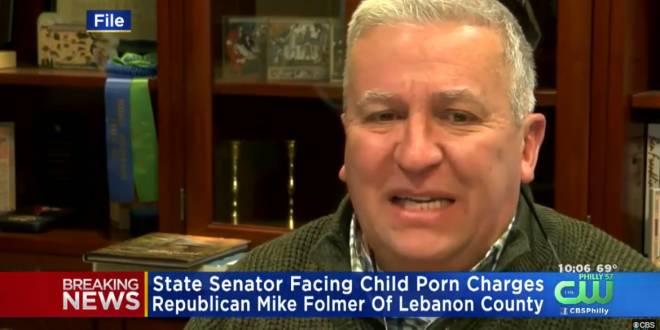 The married grandfather of seven was caught as the result of a tip that popular blogging site Tumblr found that a user had uploaded an image of child pornography using its application, officials said.

They said the tip eventually led investigators to Folmer’s home in Lebanon, Pa., where they executed a search warrant and found child pornography images on his cellphone.

Following the Tuesday arrest of a state senator from Lebanon who had been charged with possession of child pornography, Gov. Tom Wolf is calling for his immediate resignation. Folmer was charged with three counts of possession of child pornography and one count of criminal use of a communication facility. As a result of the charges, state Senate Republican leaders last night said Folmer is being removed as chairman of the Senate State Government Committee.

Wolf said, “We elect leaders to serve as a voice for those who do not have the ability to advocate for their own needs, demanding that they will protect our children, families, and communities. The charges against Senator Folmer are disgusting and beyond comprehension, and show he has taken advantage of the trust and privilege afforded by the people of Pennsylvania. He should immediately resign.”

In 2008, Folmer, who says he was a “Tea Partier before it was cool,” was a sponsor of Pennsylvania’s “Marriage Protection Act.”