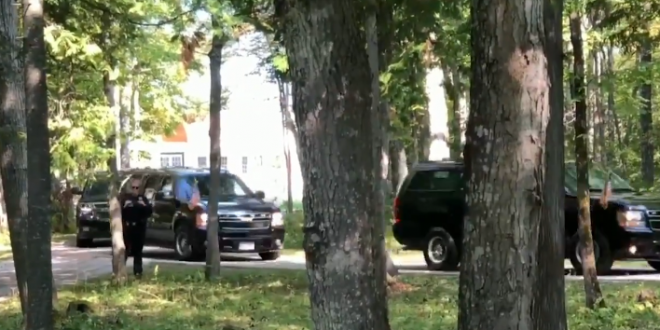 Cars are generally banned on the island, and that century-old ban is integral to its charm. When President Gerald Ford visited the island in 1975 — the only sitting president to make such a visit — he and first lady Betty Ford traveled by horse-drawn carriage.

Pence, who spoke at the Mackinac Republican Leadership Conference, is the first sitting vice president to visit the island. He traveled to and from the airport with a cluster of monster SUVs shipped to the island Friday night. It was the first-ever motorcade on Mackinac.

Cars have been banned on Mackinac Island since 1898. So what does idiot Pence do? Shows up in an EIGHT-vehicle motorcade.

No one in Trump’s administration has a damn bit of respect for anything. https://t.co/LRoe3ls7un

.@VP used an 8 car motorcade to travel from the Mackinac Island Airport to the hotel

The island disallows any use of motor power except for emergency vehicles, snowmobiles, and government-owned service vehicles.https://t.co/qYKJTNFk72

Because of Mike Pence’s drive on Mackinac Island, I’m introducing legislation that Mike Pence always be carried on a lounge chair by four shirtless and oiled men. pic.twitter.com/LqC42LnD7X

Travel on the island is usually restricted to foot, bicycle, or horse-drawn carriage, but Vice President Mike Pence broke with the tradition to travel from the Mackinac Island Airport to speak at the Michigan Republican party’s leadership conference https://t.co/DpAl2wQgPZ pic.twitter.com/mrl16MqgBm

Previous Corey Lewandowski: The Smug Assholery I Displayed During My Testimony Proves I’ll Be A Great US Senator
Next Trump: I Might Release Transcript Of Ukraine Call