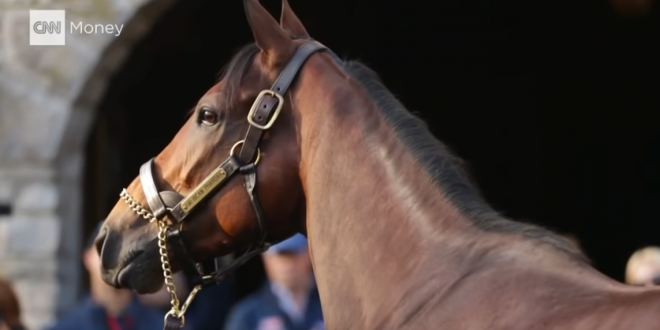 American Pharoah has it all these days. By becoming the first Triple Crown winner in 37 years in 2015, the horse secured a life of pampering and mating at Coolmore’s Ashford Stud Farm in Versailles, Kentucky.

He also enjoys visits from figures such as Vice President Mike Pence, who visited the horse on the farm in March 2018 while campaigning for Garland “Andy” Barr, (R-Ky). Except apparently Pharoah’s interaction with the former governor of Indiana didn’t go so well, at least in Pence’s version of the events, per multiple reports.

On Friday at a policy retreat for House Republicans, Pence claimed he was bitten so hard on the arm by American Pharoah that he nearly collapsed. The point of the story was to offer a metaphor for Republicans’ hopes of retaking the House next year. “In our line of work, you’re going to get bit sometimes, but you keep fighting forward,” Pence said.

Either Mike Pence has besmirched Triple Crown winner American Pharoah, or the champion horse bruised the Vice President of the United States. In any case, the two have found themselves in the strangest of political scandals.

“If he gave someone a nasty bite, I’d know it,” Dermot Ryan, the America manager for the racehorse-breeding company Coolmore, told the McClatchy news group. Ryan told McClatchy American Pharoah is a “sweet” horse and that it would be out of character for him to bite someone.

Pence, a self-described avid horseback rider, has told the story once before, saying he shows people the mark it left. It appears the only way to get to the bottom of this issues is to get the Kentucky Derby winner and Vice President in a room together again to see if the horse’s bite matches the mark on Pence’s arm.

Who the hell would lie about getting bit by a horse? Mike Pence, of course.