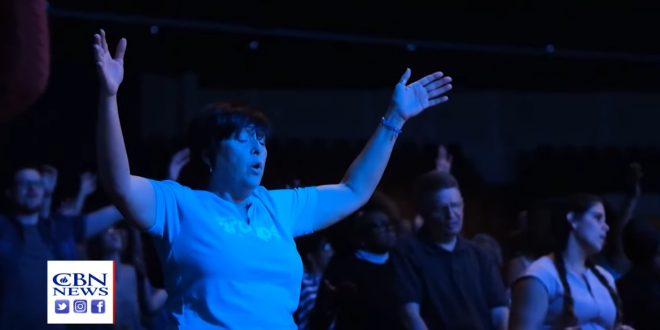 Pat Robertson’s Network: The Prayers Of Christians Are Keeping Hurricane Dorian Away From Florida [VIDEO]

Florida is still facing a serious threat from Hurricane Dorian, but it was directly in the crosshairs of this monster Category 5 storm just a few days ago. That’s when officials and Christians across the state began praying and preparing. And while the danger isn’t over, it has decreased dramatically from what was first predicted.

Sunday, worshippers at Calvary Christian Center in Ormond Beach praised God for shifting the storm a couple days ago, lessening the threat there, though they’d stockpiled supplies in a local warehouse just in case.

“And Lord God we thank you that the storm is continuing to move out of this place and away from us in Jesus name,” exclaimed one minister in prayer. “We just pray and believe and speak and declare that God is God over the wind and the waves and the storm and we believe that God has heard us,” said Calvary Senior Pastor Jim Raley.

Last year Pat Robertson claimed his prayers had personally steered a hurricane away from his Virginia Beach studios. As for the states hit by that storm, Robertson said they should have prayed as hard as he did. Hurricane Florence ended up killing 54 and causing $25 billion in damage.