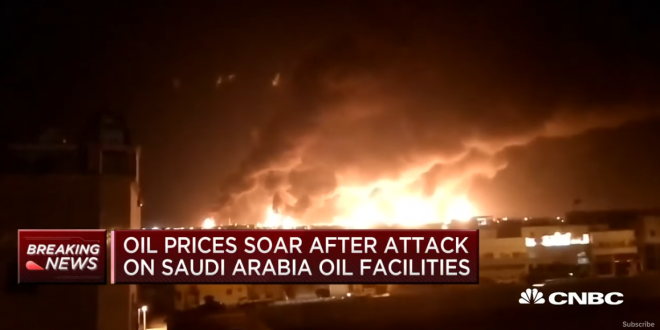 Global oil prices spiked 20% when markets reopened on Monday, after a weekend attack on Saudi Arabia’s oil facilities suspended the production of 5.7 million barrels a day. That amounts to roughly 5% of the world’s total daily crude oil production. State-run oil company Aramco said in a statement that work was underway to restore production.

The U.S. has blamed Iran for launching nearly a dozen cruise missiles and over 20 drones from its territory into a key Saudi oil facility on Saturday. Saudi authorities said the weapons were Iranian, but stopped short of blaming Iran directly for the attack.

In terms of gross peak supply loss in millions of barrels of crude today, the suspension of 5.7 million is the largest on record, according to the International Energy Agency. The last disruption of a comparable size came in 1978-9 during the Iranian Revolution, when the production of 5.6 million barrels of crude were suspended today.

Previous Joe Walsh: GOP Is A Cult, Trump Is A Would-Be Dictator
Next Secret Service Requisitions Jet Skis For Mar-A-Lago