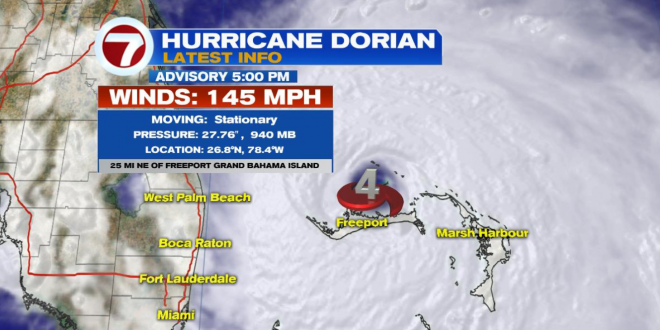 Despite the favorable movement of the cone of uncertainty, which shows the likely course of the hurricane’s center, forecasters warned against Floridians concluding that they had escaped the worst.

“Although the center of Dorian is forecast to move near, but parallel to, the Florida east coast, only a small deviation of the track toward the west would bring the core of the hurricane onshore,” the hurricane center said in a 5 p.m. forecast discussion.

An outer band came ashore about 3:30 p.m. and swept across northeast Broward and most of Palm Beach counties, bringing heavy wind and rain, according to the National Weather Service. A 56 mph gust was reported at Juno Beach pier. Sustained winds at the pier hit 40 mph, putting them at tropical strength.

Hurricane watches have been extended northward to include the entire Georgia coastline and South Carolina’s Lowcountry as Dorian remains parked over the northwestern Bahamas. It will track dangerously close to a large portion of the East Coast from Florida to Georgia, South Carolina, North Carolina and southeastern Virginia this week.

A storm surge watch has also been posted from north of Deerfield Beach, Florida, to south of Lantana, Florida, and from the Altamaha Sound in Georgia to the South Santee River in South Carolina. These watches include Jacksonville, Florida; Brunswick, Georgia; Savannah, Georgia, and Charleston, South Carolina.

Hurricane Dorian hovered at a near-standstill Monday evening as it battered the northern Bahamas with ferocious winds and heavy surf, leaving at least five dead in the archipelago as officials warned the body count could rise. The deaths occurred in the Abaco Islands, which has felt the brunt of the punishing conditions that have continued to shred homes and flood low-lying islands, Bahamian Prime Minister Hubert Minnis said at a news conference.

Officials say Dorian is set to come “dangerously close” to Florida’s east coast on Monday night and through Wednesday evening, although exactly how close is unclear and even a small deviation could change the intensity. Both the Fort Lauderdale and Palm Beach international airports in Florida have shut down their operations on Monday, and Orlando’s airport planned to cease all flights at 2 a.m. ET Tuesday. Amtrak also canceled some of its East Coast service.

Georgia’s governor is urging coastal residents to flee ahead of Hurricane Dorian, citing the storm’s powerful winds and uncertain path. Republican Gov. Brian Kemp told reporters Monday in Savannah: “This is not one to play with.”

It was Kemp’s first news conference since late Sunday when he ordered mandatory evacuations in all six counties that make up Georgia’s 100-mile coastline. Kemp said those living on Georgia’s barrier islands especially ought to flee, warning that emergency responders may not be able to reach them if causeways are underwater or blocked by debris.

Georgia officials plan to turn Interstate 16 linking Savannah and Macon into a one-way evacuation route Tuesday. The state Department of Transportation is asking motorists to consider alternate routes in anticipation of additional evacuation traffic from Florida and South Carolina.

Nine counties in Florida have issued mandatory evacuations. These included for parts of Duval County, home to Jacksonville, one of Florida’s two biggest cities, and some areas in Palm Beach County, home to President Donald Trump’s Mar-a-Lago resort.

Florida Governor Ron DeSantis urged coastal residents to heed evacuation orders. “Get out now while there’s time and while you have fuel available,” he said in a news conference from the state’s emergency operations center in Tallahassee.

Millions face evacuation orders from Florida to South Carolina — and the decision to stay or go https://t.co/HOWfmEqgDq #KMOV pic.twitter.com/BUgvCHHRdX

Some motorists are crossing the median into the reversed lanes of I-26. This is illegal and dangerous. Motorists need to follow the instructions of officials during the evacuation period. If seen by troopers, you will be ticketed. #sctweets #scwx #Dorian pic.twitter.com/V0IlznLCIP

Hundreds of utility workers have gathered and are ready to deploy and help Florida recover from any outages as a result of Hurricane Dorian.

FREEPORT| Residents climbed into their roof as floodwaters wash away homes and cars in Grand Bahama. Hurricane Dorian is moving across the island of Grand Bahama after devastating Abaco on Sunday.#dorian #hurricane #Bahamas #Grandbahama pic.twitter.com/Fi6mIpZYRB