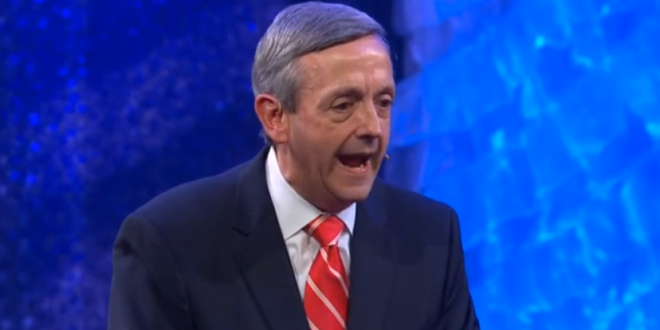 Megachurch Pastor: Thank God That Trump Knows There’s No Such Thing As Church And State Separation

“There is no such thing as a separation of church and state in the Constitution. We have allowed the secularists, the atheists, the humanists to hijack our Constitution and pervert it into something our forefathers never intended.

“And I’m gonna say this. I’m gonna say this, and it may cost me some book sales, but I’m gonna say it anyway. Thank God we have a president like Donald J. Trump who understands that. I don’t like seeing my friend under attack like he is under right now, but I don’t like the prospect of what’s going to happen in America if we allow the left to seize control of this country again.

“And I believe one of the great ironies of history is gonna be this: When the historians look back, they are gonna say with great surprise, that it was a secular, billionaire real estate tycoon from New York City who became the most pro-life, pro-religious liberty, and pro-Israel president in history.” – Megachurch Pastor Robert Jeffress, getting a wildly enthusiastic reaction at a gospel music festival.

RELATED: Jeffress last appeared on JMG when he declared that somebody should tell teenage climate activist Greta Thunberg that God has already promised that climate change will never happen. Prior to that, Jeffress earned headlines when he blamed mass shootings on children not being warned that God will ultimately punish them.