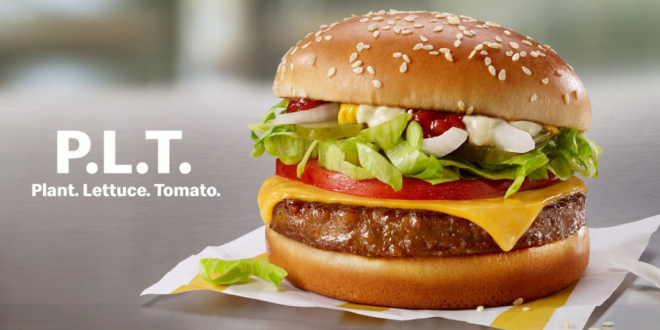 McDonald’s is going above and beyond with its new burger. The fast-food giant has partnered with Beyond Meat to create a sandwich dubbed the PLT, made with plant-based “beef,” lettuce and tomato (ignoring the fact that lettuce and tomato are also plants). The new menu item will be tested at 28 locations in Ontario, Canada.

Plant-based options have already been introduced at several of the burger chain’s competitors — including Subway, KFC and Dunkin’ Brands, which launched Beyond Meat products recently, and Burger King and White Castle, which created vegetarian Impossible Foods versions of their signature burgers.

Check out shares of Beyond Meat surging in the premarket after McDonald’s announced it’s testing a new sandwich featuring the company’s plant-based burgers $BYND pic.twitter.com/nnwpCxifaU

Unsurprisingly, McDonald's Beyond Meat test doesn't mean a 100% "vegan" burger – the PLT will be grilled on the same grill as other meat-based products. pic.twitter.com/LXWKMn834G