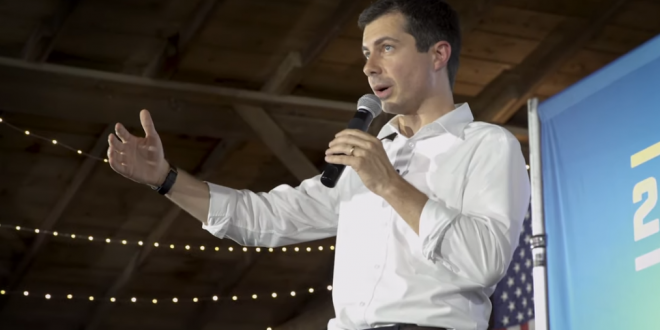 Pete Buttigieg’s new ad, which is running on TV and digital platforms, leans into his biography as a veteran and a mayor. In a 30-second voice-over, the South Bend, Ind., mayor says that in “today’s divided America, we’re at each other’s throats.”

“Our rivers and oceans are rising. Health care costs are soaring, and our kids are learning active shooter drills before they learn to read,” Buttigieg says in the ad. “To meet these challenges and to defeat this president, we need real solutions, not more polarization.”

The campaign said the ad is backed by a “significant” buy. Advertising Analytics has tracked over $210,000 in Iowa TV ad reservations by Buttigieg so far over the next week and a half, a number that could go up as the campaign starts its major advertising effort.

Previous Hannity: Fake News Is Lying About Trump’s Fake Map
Next GOP To Cancel Presidential Primaries In At Least Four States So Trump Isn’t Embarrassed By Any Challengers