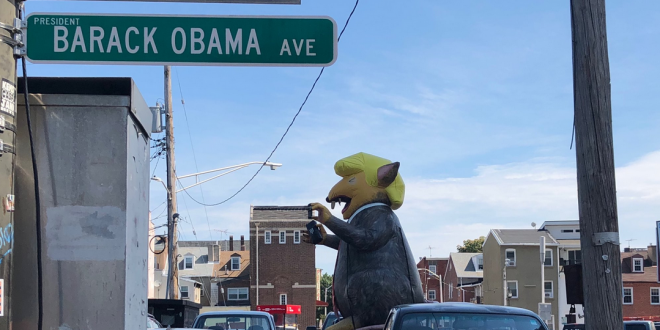 Protesters erected a balloon depicting President Trump as a rat in downtown Baltimore on Thursday ahead of his visit to the city, as well as a street sign honoring former President Obama on the town’s President Street. In footage shared online Thursday afternoon, a man named Claude Taylor could be seen inflating the giant rat and helping a man install the “President Barack Obama Ave” street sign.

“We do anti-Trump stuff, including our 14-foot inflatable Trump rat, and this is the most appropriate place that we could bring a Trump rat,” Taylor told The Baltimore Sun in an interview on Thursday. Taylor, the founder of Mad Dog PAC, which is committed to getting Trump out of office, said his organization has had the rat balloon for “a little over a year.” The visit marks Trump’s first time in the city since blasting the district as a “very dangerous & filthy place.”

The #TrumpRat welcomes the GOP House Caucus to Baltimore pic.twitter.com/Oa7nT3W4E1

Previous Ted Cruz: Gun Control Will Only Elect Elizabeth Warren
Next Liz Cheney And Rand Paul Get Into Wild Twitter Fight Over Which One Sucks Up To Glorious Leader Harder