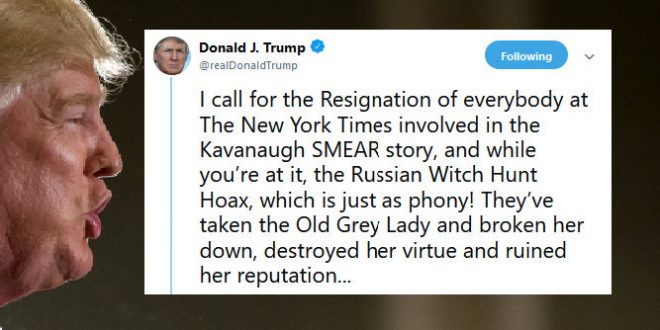 President Donald Trump tweeted tonight he’s calling for everyone “involved in the Kavanaugh SMEAR story” at the New York Times to resign. A notable detail, however, was left out, and an editor’s note has been added.

This afternoon, Trump was asked by a reporter if the Times should “fire the individuals responsible.” Trump is now calling for everyone involved to resign, saying, “The Times is DEAD, long live The New York Times!”

I call for the Resignation of everybody at The New York Times involved in the Kavanaugh SMEAR story, and while you’re at it, the Russian Witch Hunt Hoax, which is just as phony! They’ve taken the Old Grey Lady and broken her down, destroyed her virtue and ruined her reputation…

…She can never recover, and will never return to Greatness, under current Management. The Times is DEAD, long live The New York Times!