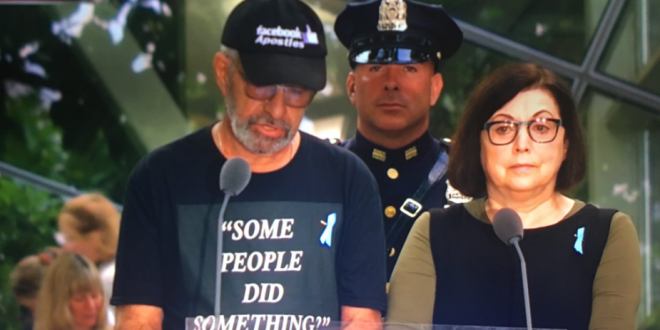 Moments ago, at a solemn ceremony marking the collapse of the South Tower, a man paused from reading the names of victims, one of whom was his mother, to launch an attack on Rep. Ilhan Omar and Democrats, calling out “the squad” for their apparent failure to recognize that 9/11 was an assault on “our Judeo-Christian values.” This man repeated the words on his shirt, promoting the right wing lie that Omar had trivialized 9/11 as merely that time that “some people did something.” His words got rousing applause and the organizers were clearly in on his plans as his shirt would have been a giveaway.

UPDATE: This man is the founder of the Facebook Apostles group, as his hat indicates.

This guy is supposed to be reading names but is instead attacking Rep Ilhan Omar and “the squad.” Good fucking grief. pic.twitter.com/AoWIqFD6CW

At memorial, Nicholas Haros Jr., who lost his mom in 9/11, assails @Ilhan Omar, who in April said of the attacks: “some people did something”: “We are here today, congresswoman, to tell you and the squad just who did what to whom. Show respect in honoring them, please.”

Previous That Day: My September 11th Short Story
Next TEXAS: Biden +10 Over Warren, +16 Over Bernie