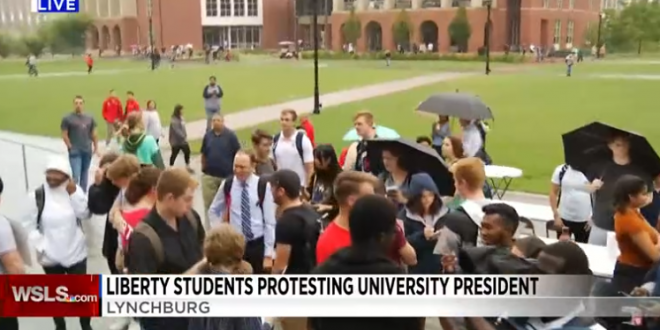 Students at Liberty University in Virginia have gathered to protest in the wake of news reports containing allegations that school president Jerry Falwell Jr. “presides over a culture of self-dealing” and improperly benefited from the institution.

The News & Advance reports the students gathered Friday at the private evangelical university in Lynchburg. Photos show students holding signs calling for accountability and an investigation.

Falwell acknowledged both of the emails in the article were authentic but said his comments lacked full context. “The chief of police spoke out against my idea to allow concealed carry on campus and that was the reason I was saying things that weren’t so nice about him,” he said, referring to a 2011 policy allowing visitors, students and staff who have concealed-weapons permits to carry guns on campus.

“And I told him today, ‘you and I disagree; I bad mouthed you a little bit, that’s called business.’” “I’m going to be me no matter what,” he added. “That never will change and I will say whatever I think whenever I want to say it. My comments are always appropriate for whatever happened and sometimes it might not be the most pleasant thing in the world but you know what, that’s a part of running a business.”

I’m so impressed with how @LibertyU students conducted themselves today at the protest! The ones who had concerns and the ones who supported me were both respectful and not angry-very Christ-like in their behavior. Our students are an example the world can learn from!

What started as a protest turned into mostly a series of civil discussions at Liberty U. We’ll share some of the conversations about Jerry Falwell Jr. tonight starting on 10 News at 5. pic.twitter.com/OuO0o834b0

Previous New York Times And CNN To Host Next Dem Debate
Next Research Shows Mike Pence Once Argued That Since Homosexuality Is A Choice, Gays Don’t Deserve Rights