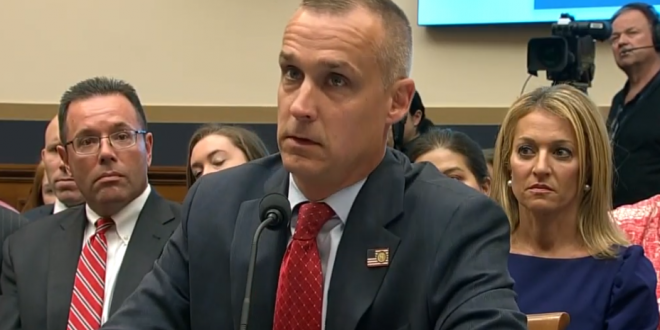 Lewandowski: I Don’t Have To Be Truthful To The Press

Axios has some of today’s lowlights:

In a combative exchange with Rep. Eric Swalwell (D-Calif.) — whom Lewandowski mockingly called President Swalwell in reference to his failed presidential bid — Lewandowski refused to read aloud from the Mueller report. Rep. David Cicilline (D-R.I.) subsequently demanded that Lewandowski be held in contempt.

Under grilling from committee counsel Barry Berke, Lewandowski would not answer whether he lied in an interview on MSNBC about speaking to Jeff Sessions: “I have no obligation to be honest with the media because they are just as dishonest as everybody else.”

Lewandowski later told Berke, “Never have I called into question the validity of the Mueller report,” despite saying in his opening statement that the investigation was an attempt to “take down a duly elected President of the United States.”

As anybody who watched five minutes today can attest, Lewandowski was exactly the smug, lying, evasive dickweed he’s always been. And he’s going to run for the US Senate.

“I have no obligation to be honest with the media because they’re just as dishonest with everybody else,” Lewandowski says when confronted with an MSNBC clip where he says he never got involved with anything to do with AG Sessions.

Lewandowski tweeted out a link to a new web site supporting his “potential senate run” in the middle of the hearing.https://t.co/Mc1RJ7ZHdQ

Lewandowski just said: “I have no obligation to be honest with the media, because they’re just as dishonest as anybody else,” while being pressed by a House Dem lawyer on whether his past public statements in the past were true.

Dem staff lawyer Barry Berke got more out of Lewandowski than House members did during a day of questioning, including an admission that lying to the press is cool with him. Shows why so many outsiders have urged House committees to let dedicated lawyers ask all the questions.