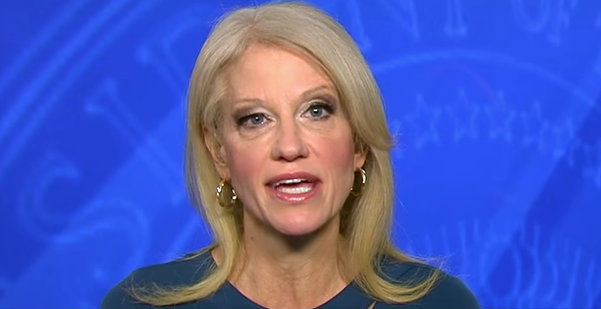 Kellyanne Conway: We Won’t Let Socialists Use Mass Shootings As An Excuse To Confiscate Guns [VIDEO]

White House counselor Kellyanne Conway said that the Trump administration won’t let “a bunch of liberals and socialists” use mass shootings carried out by “bad actors who should not have firearms in the first place” to take people’s guns from them.

Bill Hemmer — filling in for Chris Wallace on Fox News Sunday — brought up how Trump had hinted at support for background checks before saying, “If this is a movement by the Democrats to take your guns away, then it’s never going to happen because we’re never going to let that happen.”

After initially saying he supported universal background check legislation in the wake of shootings in El Paso, Texas, and Dayton, Ohio, Trump has since backed off of the idea, reportedly taking a call in which National Rifle Association CEO Wayne LaPierre told him the organization would not support the idea Conway insisted Trump “wants to do something all at once” regarding the response to mass shootings, adding “there are pieces of legislation that already exist.”

“I want to look America’s other mothers in the face and say we need to look at the fact patterns- we have to look at what has happened and fix that for the next time,” she said, before blasting former Rep. Beto O’Rourke (D-Texas) for vowing to confiscate AR-15s in last week’s Democratic debate, which moderate Democrats have expressed concerns may be used as an attack for Republicans.

Previous Auto Workers Call Strike Against General Motors
Next Cuccinelli: The Bahamas Can Take Care Of Their Own