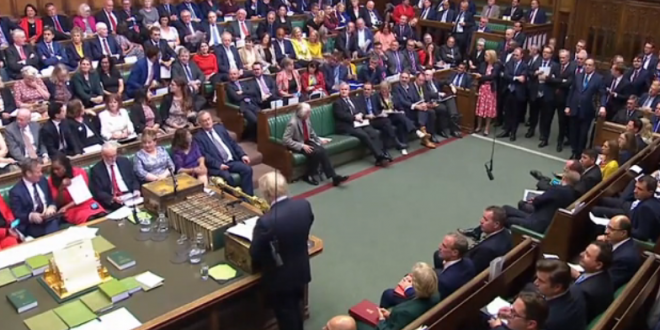 Boris Johnson has lost his majority of one after Tory MP Philip Lee defected to the Lib Dems by sitting on their bench.

He made the move while Boris Johnson was mid way through delivering a speech in the House of Commons. The surprise move means there is now no parliamentary majority.

In a letter of explanation, the MP for Bracknell said it was ‘no longer possible to serve my constituents’ and the country’s best interests as a Conservative Member of Parliament.

The pro-EU former minister walked across the Commons chamber, to sit with Jo Swinson’s party, meaning the prime minister now leads a minority government – the first since 1996. “The party I joined in 1992 is not the party I am leaving today,” said Dr Lee, a supporter of a Final Say referendum on Brexit.

“This Conservative government is aggressively pursuing a damaging Brexit in unprincipled ways. It is putting lives and livelihoods at risk unnecessarily and it is wantonly endangering the integrity of the United Kingdom.

“More widely, it is undermining our country’s economy, democracy and role in the world. It is using political manipulation, bullying and lies. And it is doing these things in a deliberate and considered way.”

BREAKING: Utterly extraordinary! Phillip Lee has just crossed the floor in the House of Commons joining the Lib Dem’s.

New: The British Conservative party, currently in government under UK Prime Minister Boris Johnson, has lost its working majority in Parliament after conservative member of Parliament Philip Lee defected to the Liberal Democrats.