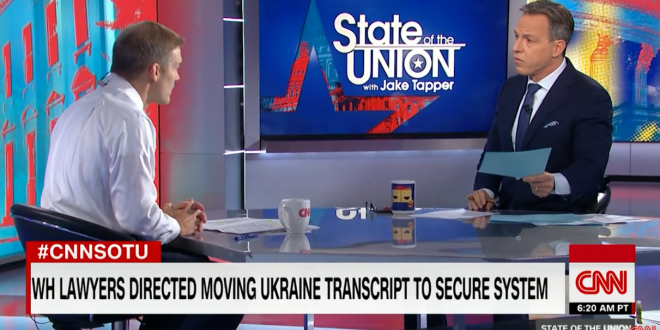 CNN’s Jake Tapper fact-checked Rep. Jim Jordan in real time during an interview Sunday on “State of the Union” as the Ohio Republican defended President Trump amid an impeachment inquiry sparked in part by Trump’s dealings with his Ukrainian counterpart.

Tapper pushed back on several fronts, including when Jordan repeated Trump’s unfounded allegations over former Vice President Joe Biden’s alleged wrongdoing in dealing with Ukraine while Biden’s son Hunter Biden sat on a Ukrainian company’s board.

Jordan also called the whistleblower who filed a complaint centered on a call in which Trump asked Ukrainian President Volodymyr Zelensky to investigate the Bidens a “bureaucrat who didn’t like the president.” “No, we don’t know,” Tapper replied.

If Rep. Jim Jordan (R-OH) doesn’t get a Speakership out of these endless months of carrying water for the career criminal in the White House, he’s going to again light the black candles and scratch out a pentagram in the dirt to demand of Lucifer that this foul deal be terminated

Rep. Jim Jordan got up this morning trying to play games on national television and @jaketapper said “not today.” https://t.co/eiZiube1pO

To @Jim_Jordan and other spinners arguing WH hid transcript of Ukraine call on secret server to prevent “leaks”: Why that particular Ukraine call (and perhaps a few others of similar nature)?

If it was really about leaks, then *all* calls would’ve been on the secret server.

They should make Jim Jordan wear the busboy’s jacket for these appearances.

“I would think somebody who’s been accused of things in the last year or two would be more sensitive about throwing out wild allegations against people,” Jake Tapper said. https://t.co/IDj52X6tq7

In fairness, making @Jim_Jordan look like an incompetent dumbass isn’t very difficult. But kudos to @jaketapper for dragging him.

Jim Jordan literally defends Trump committing a felony by knowingly and willfully violating federal campaign laws. (Not to mention possible bribery or extortion) This is more proof that the GOP’s loyalty is no longer to the USA- it’s to Donald Trump. https://t.co/n48r1RbgWI

Previous Graham: Dems Are Afraid To Hold Impeachment Vote
Next Guiliani: Mike Pompeo Knew I Was Talking To Ukraine