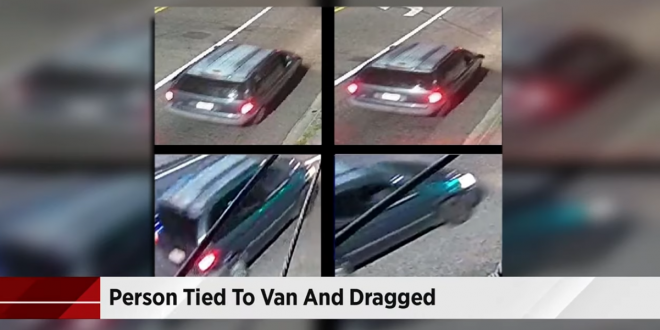 Police are investigating a brutal crime early Friday morning in Northwest Jacksonville: A person was severely beaten and then tied to the bumper of a minivan and dragged for two blocks before the rope was cut and the victim was left lying in the street.

The Jacksonville Sheriff’s Office said the person, who may have already been unconscious, was dragged from the intersection of Moncrief Road and West 36th Street — the entrance to the Majestic Plaza Apartments — to Pearce Street. The victim was taken to a hospital with life-threatening injuries.

Police recorded graphic video of the incident at the Real Time Crime Center. “We can’t release it,” JSO Assistant Chief Brien Kee said. “It is horrendous.” Multiple sources, including the maintenance worker at the apartment, told News4Jax the victim is a transgender woman.

UPDATE: From the same outlet linked above

According to the Jacksonville Sheriff’s Office, the man suspected in the attack was taken into custody late Sunday. Eric Bridges, a 34-year-old ex-convict, was booked on an attempted murder charge into the Duval County jail, where he remains in custody in lieu of $500,000 bail.

The relative said he was caught off-guard by what happened to his loved one because the victim isn’t the sort of person who goes out and gets into trouble. He said he plans to show up for every court date for Bridges in the hopes of getting justice in this case.