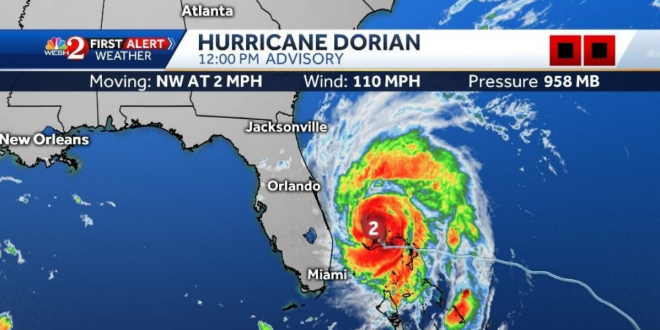 Hurricane Dorian started to move northward toward the U.S. Tuesday morning after stalling over the Bahamas and causing widespread devastation. Millions of people in Florida and the Southeast were anxiously watching the storm, a powerful and menacing threat sitting miles off the Florida coast.

Dorian was a Category 2 storm with maximum sustained winds of 110 mph as of 11 a.m. EDT, the National Hurricane Center said. The hurricane slammed into the Bahamas as a Category 5 — as powerful as a hurricane can get.

It unleashed massive flooding, shredding roofs, hurling cars and forcing rescue crews to take shelter. By late Monday afternoon, the storm’s top sustained winds fell to 130 mph — down from 185 mph hours earlier — as it crept along on its path of destruction. Storm surges in some places raised water levels more than 20 feet above normal.

#Dorian is now a Category 2 hurricane with winds of 110 mph. It is beginning to slowly pull away from Grand Bahama Island, and is now moving northwest at 2 mph. pic.twitter.com/buxcLJfA5f

A reminder that as of now we do not have an expected time to resume operations, as it depends on many factors as the storm moves past. Updates will be posted here as they become available and passengers are encouraged to check with their airlines for flight updates. Thanks, all.

LATEST: Dorian is now a Category 2 storm and is expected to approach the east coastline of Florida Tuesday night through Wednesday evening. https://t.co/iAS7BHNpWT pic.twitter.com/zRX5gYaVj1

‘MUST BE TOURISTS’: New video shows a man on a jetty swept away by heavy surf in Palm Beach Shores, Florida, a warning as Hurricane Dorian, now a Category 2 storm, begins to inch in a northwest track toward the state’s eastern coastline. https://t.co/IKRdyUbYF6 pic.twitter.com/eJjmF2baI9

Dorian has weakened to a Category 2 hurricane, but it’s growing in size as the storm inches toward the Southeast US at 2 mph. Follow live updates:https://t.co/WPbYPVXEcE pic.twitter.com/Qu2VOoK4i2

Previous Trump Attacks Mayor Of London, Where “Knife Crime” Is So Bad “People Are Afraid To Even Walk The Streets”
Next Walmart To Stop Selling Ammo For Assault Rifles And Handguns, Will No Longer Allow Open Carry In Stores