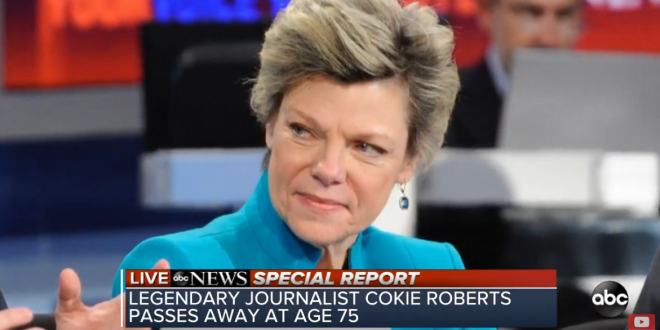 Veteran journalist Cokie Roberts, who joined an upstart NPR in 1978 and left an indelible imprint on the growing network with her coverage of Washington politics before later going to ABC News, has died. She was 75. Roberts died Tuesday due to complications from breast cancer, according to a family statement.

A bestselling author and Emmy Award winner, Roberts was one of NPR’s most recognizable voices and is considered one of a handful of pioneering female journalists — along with Nina Totenberg, Linda Wertheimer and Susan Stamberg — who helped shape the public broadcaster’s sound and culture at a time when few women held prominent roles in journalism.

Roberts won numerous awards during her long career in journalism, including three Emmys and the Edward R. Murrow award. She was inducted into the Broadcasting and Cable Hall of Fame. She was recognized by the American Women in Radio and Television as one of the 50 greatest women in the history of broadcasting.

Previous AOC To Endorse Challenger To House Dem Incumbent
Next Roseanne Barr: ABC Fired Me Because I Support Trump