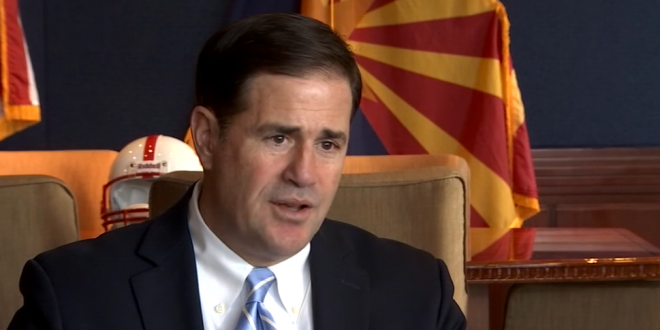 Gov. Doug Ducey won’t support extending state laws to prohibit discrimination against individuals based on their sexual orientation. “I’m against discrimination in all its forms,” the governor said Thursday. But Ducey said he does not think it’s necessary to provide people who are gay the same legal protections that exist for already established protected classes.

The governor also said he believes the Arizona Supreme Court struck the right balance earlier this week when the justices decided that the Christian owners of a calligraphy firm have the right to refuse to prepare wedding invitations for same-sex couples.

Ducey said the decision was narrowly crafted and struck the proper balance between the rights of the business owners and the rights of others to be free from discrimination. And the governor noted that the justices did not strike down the entire Phoenix ordinance that prohibits discrimination based on sexual orientation.

Phoenix, Tucson, Tempe, and Flagstaff all have local LGBT ordinances, but not other protections exist in the rest of Arizona.

Ducey has a mixed track record on LGBT issues for a Republican. In 2015, he revoked a statewide ban on adoption and foster parenting by same-sex couples.

And earlier this year he signed a repeal of the so-called “No Promo Homo” law which banned public school teachers from speaking about HIV/AIDS in a way that “promotes the homosexual lifestyle.”

But Ducey has also appeared on the same stage with anti-LGBT florist Baronelle Stutzman at an event organized by an Arizona-based hate group.