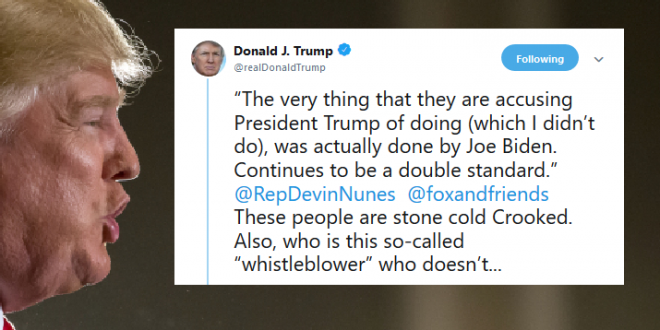 Glorious Leader Rants: I Didn’t Do It, But Joe Biden Did

President Donald Trump on Monday intensified his attempts to justify a phone call with Ukraine’s president in which he reportedly pushed for an investigation into one of his chief political rivals, maintaining that he‘s merely concerned about stamping out corruption.

He once again dismissed the accusations that he was using his position of power to pressure a foreign government into investigating former Vice President Joe Biden and his son as a “witch hunt.” For the first time, however, Trump appeared to connect the idea to the issue of foreign aid.

“If we’re supporting a country, we want to make sure that country is honest,” Trump told reporters after arriving for the U.N. General Assembly. “If you don’t talk about corruption, why would you give money to a country that you think is corrupt? One of the reasons the new president got elected is he was going to stop corruption. So it’s very important that on occasion you speak to somebody about corruption. Very important.”

“The very thing that they are accusing President Trump of doing (which I didn’t do), was actually done by Joe Biden. Continues to be a double standard.” @RepDevinNunes @foxandfriends These people are stone cold Crooked. Also, who is this so-called “whistleblower” who doesn’t…

….know the correct facts. Is he on our Country’s side. Where does he come from. Is this all about Schiff & the Democrats again after years of being wrong?

Trump again basically cops to asking Ukraine about Biden: “We’re supporting a country. We want to make sure that country is honest…it’s very important to talk about corruption. if you don’t talk about corruption, why would you give money to a country that you think is corrupt?” pic.twitter.com/u2zlloPl1X