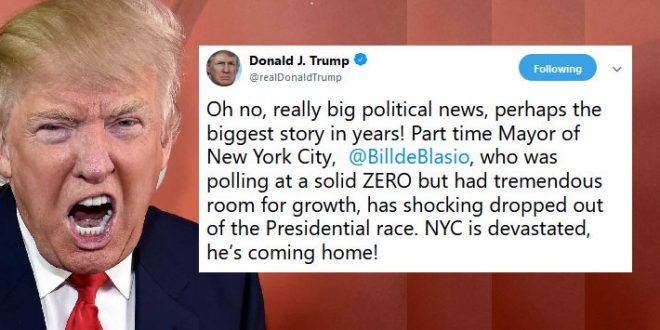 As every news outlet in the nation breathlessly reports on the still-unfolding whistleblower scandal, which may ultimately prove that Trump extorted a foreign power in order help his reelection campaign, your Glorious Leader devoted his first tweet of the day to his never-ending childish mission to insult and taunt his critics.

Oh no, really big political news, perhaps the biggest story in years! Part time Mayor of New York City, @BilldeBlasio, who was polling at a solid ZERO but had tremendous room for growth, has shocking dropped out of the Presidential race. NYC is devastated, he’s coming home!

NYC still hates you as well as the majority of America, fuckface.