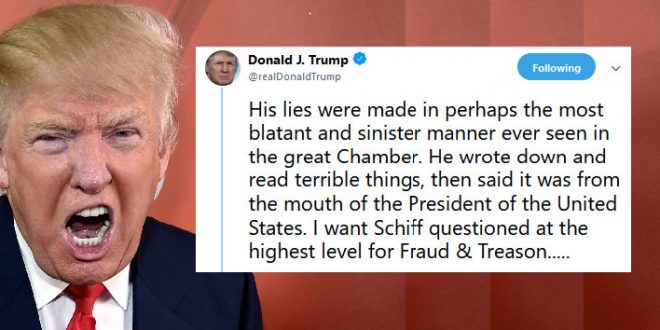 Like every American, I deserve to meet my accuser, especially when this accuser, the so-called “Whistleblower,” represented a perfect conversation with a foreign leader in a totally inaccurate and fraudulent way. Then Schiff made up what I actually said by lying to Congress……

His lies were made in perhaps the most blatant and sinister manner ever seen in the great Chamber. He wrote down and read terrible things, then said it was from the mouth of the President of the United States. I want Schiff questioned at the highest level for Fraud & Treason…..

….In addition, I want to meet not only my accuser, who presented SECOND & THIRD HAND INFORMATION, but also the person who illegally gave this information, which was largely incorrect, to the “Whistleblower.” Was this person SPYING on the U.S. President? Big Consequences!

These Radical Left, Do Nothing Democrats, are doing great harm to our Country. They are lying & cheating like never before in our Country’s history in order to destabilize the United States of America & it’s upcoming 2020 Election. They & the Fake News Media are Dangerous & Bad!

The President is calling for a treason charge to be brought against the House Intel chairman for reading a White House-produced document that quotes the President. Treason is a capital crime, punishable by death. https://t.co/s580pSZede

Trump’s implication that he wants @RepAdamSchiff executed for treason is unhinged, disgusting, and beyond intolerable. The president is acting like a raving lunatic. https://t.co/kymtnxM6mR

Trump saying he wants Schiff “questioned at the highest level for Fraud & Treason” is terrifying—not for Schiff, mind you, but for Trump’s allies. It’s like the final thing you’d expect Hans Gruber to shout back up at John McClane while falling, if they were both politicians.

A president of the United States accusing a member of Congress of treason is literally unconstitutional and presumptively impeachable. Imagine this was happening in another country—it would signify a massive breakdown. You’d expect someone to fix it. And if not, you’d worry a lot https://t.co/shCRvCUyg8

I feel like threatening an opposition party member of congress with treason charges is probably an impeachable offense all on its own.

This thread was all posted at once. It was prewritten by Trump’s team. His team is calling for the House Intel Chairman to be put to death for treason. This is yet another abuse of power and attempted obstruction of justice. https://t.co/HyPx6m8bXv