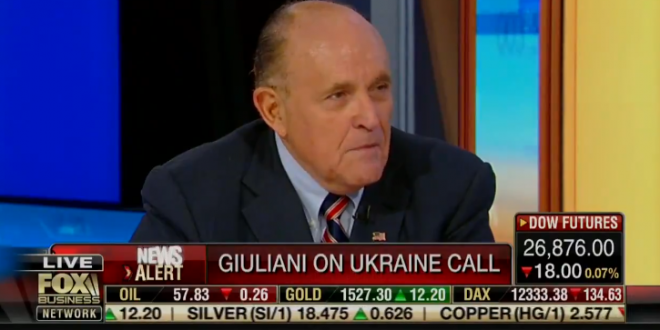 Giuliani On Whether Trump Threatened To Cut Off Aid To Ukraine: I Can’t Say With 100% Certainty He Didn’t

Donald Trump’s personal lawyer Rudy Giuliani didn’t rule out the possibility that the president threatened to cut off aid to Ukraine over calls for an investigation into largely discredited allegations against former Vice President Joe Biden and his son.

Giuliani first said in response to a question on Fox Business Monday that Trump didn’t threaten Ukraine aid, but then added he “can’t say for 100%.”

Trump appeared to acknowledge on Sunday that he had discussed Biden — the 2020 Democratic presidential front-runner — in a July 25 phone call with Ukraine President Volodymyr Zelenskiy that is the subject of a congressional investigation.

Giuliani pressed about whether Trump threatened to cut off foreign aid to Ukraine: “I can’t tell you if it’s 100%”
pic.twitter.com/BruZrnBanO