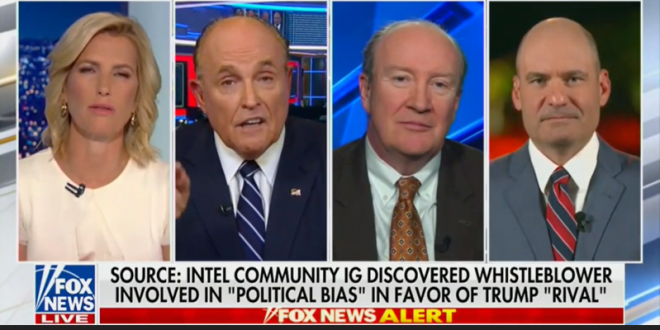 Giuliani Melts Down On Fox News: “Shut Up, Moron! Shut Up! Shut Up! Keep Your Lying Mouth Shut, Idiot!”

Rudy Giuliani hurled abuse at a fellow Fox News guest, calling him a “serial liar” and a “moron” as the president’s opponents pledged to seek Donald Trump’s removal from office. With the threat of impeachment hanging in the air, Mr Giuliani’s outburst on Fox News’ The Ingraham Angle came as he looked to defend Donald Trump and himself from allegations the president had offered to trade aid for political favours with the government of Ukraine.

The lawyer lambasted fellow guest Chris Hahn, a former aide to senior Democrat Chuck Schumer, saying he should “sue him for libel” after the liberal commentator implied Giuliani was asked by the US State Department “to dig up political dirt on Trump’s opponent”. “Shut up moron, shut up” the president’s legal representative shouted over the left-wing pundit. “You don’t know what you’re talking about idiot. You’re just lying…just keep your lying mouth shut.”

Rudy Giuliani just told frequent Fox News Democratic guest Chris Hahn to “shut up” repeatedly and called him an “idiot” and a “moron,” which you’re not typically allowed to call your fellow cable news panelist pic.twitter.com/avc0mBWL8Z

Rudy Giuliani attacks Fox guest: “I should sue you for libel… Shut up moron! Shut up! Shut up! You don’t know what you’re talking about, idiot!” pic.twitter.com/zeXMzGMjDI