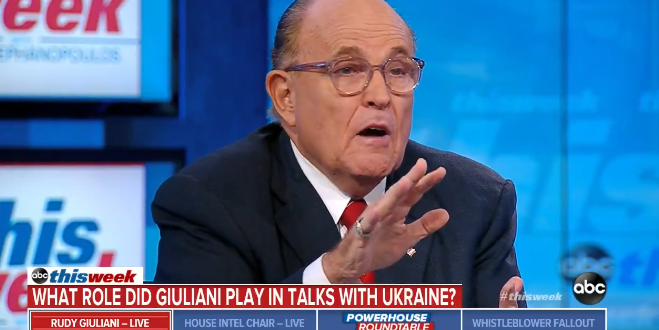 Giuliani: I’ll Only Testify If Trump Tells Me To [VIDEO]

Giuliani told George Stephanopoulos on ABC’s “This Week” that he will be “guided by my client.”

“I’m a lawyer,” he said. “It’s his privilege not mine. If he decides that he wants me to testify, of course I’ll testify.” Giuliani added he thought Schiff should be removed from his committee post.

NEW: Asked repeatedly if he would cooperate with House Intelligence Committee, Rudy Giuliani tells @ThisWeekABC, “I wouldn’t cooperate with Adam Schiff,” but then says he would “consider” it were chair Adam Schiff removed. https://t.co/S0bTTE1vKj pic.twitter.com/gszI6zeRUV

Previous Christians March On Toronto Gayborhood “For Jesus”
Next Miller: The Whistleblower Is A “Deep State Operative”