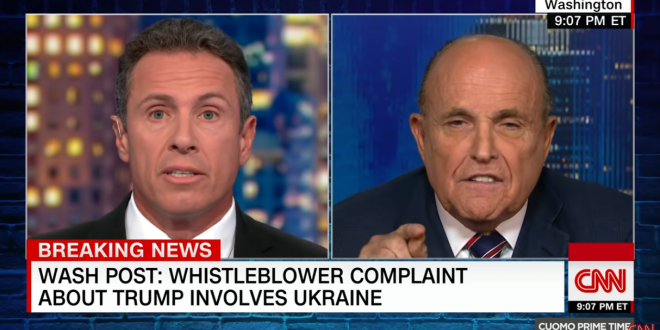 Immediately after anchor Chris Cuomo introduced him and summarized the latest news out of the whistleblower story, which had only broken about an hour prior, Giuliani went into attack mode. “I’m glad I’m on tonight, because what you just said is totally erroneous,” Giuliani said.

Giuliani spent the first half of the interview repeating the claim that Biden in 2016 pressured Ukraine to drop its top prosecutor, which at the time was also investigating a natural gas company where Biden’s son Hunter was on the board.

“You never asked anything about Hunter Biden? You never asked anything about Joe Biden?” Cuomo followed up. “The only thing I asked about Joe Biden is to get to the bottom of how it was that Lutsenko dismissed the case against AntAC,” Giuliani said, referring to former Ukrainian prosecutor General Yuriy Lutsenko and the Ukrainian-based Anti-Corruption Action Centre (AntAC).

CNN’s @ChrisCuomo: “Did you ask Ukraine to look into Joe Biden?”@RudyGiuliani: “Of course I did”

President Trump’s attorney says he had spoken with a Ukrainian official about Joe Biden’s possible role in that government’s dismissal of a prosecutor who investigated Biden’s son. pic.twitter.com/hqmqtmx2VW

Internet blown away by Giuliani’s ‘pants-sh*tting panic’ freak out on CNN’s Cuomohttps://t.co/ij7fH1VFXu

2. Once people realize the news is not fake, send Rudy Giuliani on TV to say: “So what!?”

A President telling a Pres-elect of a well known corrupt country he better investigate corruption that affects US is doing his job. Maybe if Obama did that the Biden Family wouldn’t have bilked millions from Ukraine and billions from China; being covered up by a Corrupt Media.

Giuliani is the guy who admits they did it, so that Trumpworld and the GOP can immediately pivot to “so what?”

Exactly how it worked w the Stormy Daniels payments.

Cuomo: Did you ask Ukraine to investigate Joe Biden?
Giuliani: No, actually I didn’t.

Cuomo: So you did ask Ukraine to look into Joe Biden?
Giuliani: Of course I did! pic.twitter.com/tuElM5P4og

Chris Cuomo: Did you ask Ukraine to order a code red?

Chris Cuomo: DID YOU ASK UKRAINE TO ORDER A CODE RED?