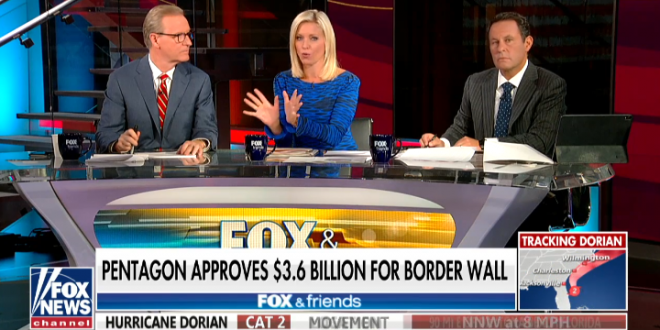 Fox & Friends: Trump “Never Should Have” Run On Promise That Mexico Would Pay For The Wall [VIDEO]

Fox & Friends made a subtle but almost historic confession on Thursday’s show: President Donald Trump “never should have” run on the 2016 campaign promise that Mexico would pay for his border wall.

The admission that Trump top campaign promise was a fantasy came as the curvy couch talked about how Trump is drawing money from other projects and areas of the government to pay for the wall’s construction.

As Brian Kilmeade took notice of the headlines on this matter, he admitted “the president never should have said Mexico is going to pay for the wall.”

“But it’s amazing, the people that could not care less, as President Obama’s administration starved the military year after year and watched it rot away. So the President for the last three years, as General Mattis said, he got 87% of his requests approved … rebuilding,” Kilmeade said.

“They’re taking a small percentage and reprogramming and delaying projects, not canceling them. But it didn’t stop the sensationalist headlines. Well, certainly people are concerned about military projects. The Daily Beast writes a headline, Trump raids elementary schools to pay for wall: Mexico off the hook.”

“He’s right. The President never should have said Mexico is gonna to pay for the wall, though he says they’re going to get it in fees at border crossings.”