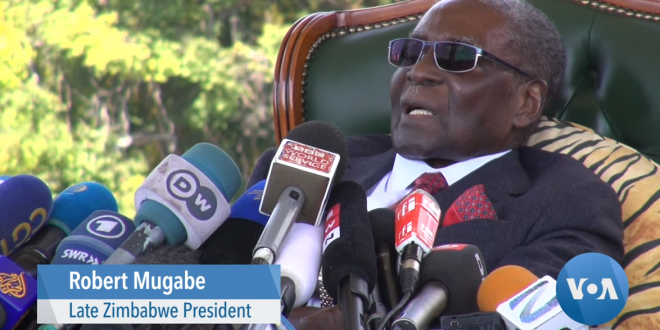 Robert Mugabe, the first prime minister and later president of independent Zimbabwe, who traded the mantle of liberator for the armor of a tyrant and presided over the decline of one of Africa’s most prosperous lands, died on Friday. He was 95.

Mr. Mugabe, the world’s oldest head of state before his ouster in 2017, was the only leader Zimbabweans had known since independence, in 1980. Like many who liberated their countries, Mr. Mugabe believed that Zimbabwe was his to govern until the end. In a speech before the African Union in 2016, he said he would remain at the helm “until God says, ‘Come.’”

Throughout, Mr. Mugabe remained inscrutable. Remote, calculating, ascetic and cerebral, a self-styled revolutionary inspired by what he once called “Marxist-Leninism-Mao-Tse-tung thought,” he affected a scholarly manner, bespectacled and haughty, a vestige of his early years as a schoolteacher. But his hunger for power was undiluted.

He singled out Zimbabwe’s small gay community, among other groups, denouncing homosexuals as “lower than dogs and pigs” and ordering the expulsion of a gay organization from the Zimbabwe International Book Fair in 1995. He claimed that homosexuality had been unknown in Africa before European colonization and blamed it for the AIDS crisis when, in fact, heterosexual activity was the main cause of AIDS in Africa.

After his first wife, the former Sally Hayfron, died in 1992, Mr. Mugabe married his secretary and longtime mistress, Grace Marufu, 41 years his junior. She set a new standard for conspicuous consumption, acquiring the derogatory nickname “Gucci Grace” and shattering his reputation for personal honesty. More than one flight of the state-owned Air Zimbabwe was canceled at the last minute so that she and her entourage could fly to Europe for a shopping spree.