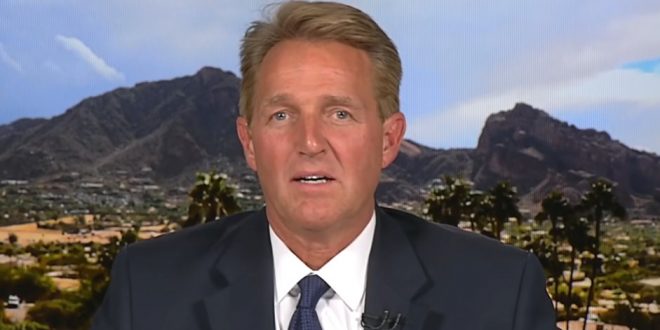 Former Republican Sen. Jeff Flake said on Friday at least 35 Republican senators might support impeachment. Flake says he made his comments after Republican political consultant Mike Murphy told MSNBC that if it were a secret vote, at least 30 Republican senators would vote to impeach Trump. “I said, ‘No. That’s probably low balling. It could be 35.’ Anybody who has sat through two years, as I have, of Republican luncheons realizes that there’s not a lot of love for the president,” Flake says.

“There’s a lot of fear of what it means to go against the president, but most Republican senators would not like to be dealing with this for another year or another five years. So yeah, a private vote would go a lot differently, but that doesn’t matter because that’s just a hypothetical.” While he hopes the president isn’t impeached, Flake says Democrats were right to launch an inquiry into President Trump’s phone call with Ukraine’s president.

This is probably true.
And this is the reason Trump is hinting at taking Pence down with him, so the GOP Senators won’t jump ship.

I want Trump impeached as much as anyone. Though, I am glad our Congress doesn’t vote in “private”. Let’s impeach him in the open and be proud of your vote!#ImpeachmentNowhttps://t.co/w2wiOmPMTq