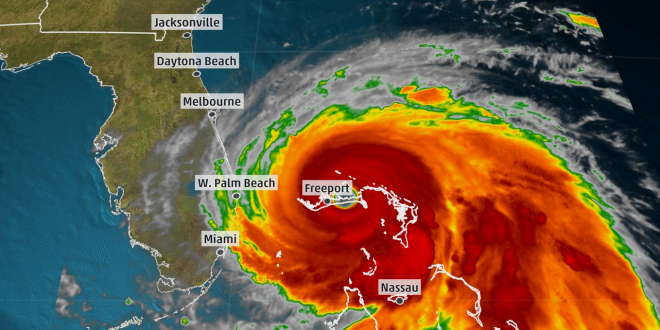 Dorian Stalls Over The Bahamas, US Evacuations Begin

As Hurricane Dorian struck the northwestern Bahamas on Sunday, the National Hurricane Center said that the maximum sustained winds around the eye of the “extremely dangerous” storm had reached 185 miles an hour, making it a “catastrophic” storm with “devastating winds.”

Early Monday, after the eye of the storm had reached Grand Bahama Island, the winds had slowed slightly to 165 miles an hour. The center said further gradual weakening was forecast but fluctuations in intensity up or down could occur. By 6 a.m., the center warned that the storm would continue to linger over the island for hours.

Early images and video emerging from the Abaco Islands, which were hit especially hard overnight, showed scenes of devastation as the powerful, slow-moving storm churned its way through the islands. The footage showed roofs torn from houses and cars and debris bobbing along inundated streets battered by strong winds and heavy rains.

Many people are without adequate shelter as Hurricane Dorian’s category 5 winds and rains caused “extensive damage” to the islands of Abaco and Grand Bahama, according to initial assessments from authorities and Red Cross officials on the ground.

As many as 13,000 homes have been severely damaged or destroyed, according to a statement from the International Federation of Red Cross and Red Crescent Societies (IFRC) and extensive flooding has created an “urgent need” for clean water as wells become contaminated with saltwater.

Hurricane Dorian will “continue to pound” Grand Bahama Island for the rest of today and tonight and will move “dangerously close” to Florida’s east coast, the National Hurricane Center (NHC) warned in its latest update.

In Florida, mandatory evacuation orders were issued for low-lying and other at-risk areas in Brevard, Martin and Palm Beach, St. Johns, St. Lucie and Volusia counties, including the area in Palm Beach where President Trump’s Mar-a-Lago resort is located. Other counties, including Flagler, Glades and Osceola, issued voluntary evacuation orders for some areas, according to the state’s Division of Emergency Management.

Though forecasts show the storm is unlikely to make landfall in the state, that remains a possibility, the hurricane center said. A hurricane warning was in effect from Jupiter Inlet in Palm Beach County to the Volusia-Brevard County line in central Florida. The storm is forecast to then march north toward Georgia and the Carolinas, causing flooding and strong winds.

#Dorian has now stalled over the northwest #Bahamas. Exactly when it makes a pair of turns (north, then northeast) is critical for how much of the coast experiences #hurricane conditions. Complete forecast briefing: https://t.co/7Q7N6AKYEo pic.twitter.com/p6rhFn8U91

Please take a moment to read this see if you are in one of the zones being evacuated tomorrow, Monday, September 2 at 12:00 noon. #HurricaneDorian https://t.co/iSvOzkWnxU

Starting noon tomorrow, individuals east of I-95 in Bryan, Camden, Chatham, Glynn, Liberty, and McIntosh Counties must evacuate due to Hurricane #Dorian. @GeorgiaEMA and @GADeptofTrans will start westerly contraflow on I-16 at 8 AM on Tuesday, Sept. 3. Stay vigilant and be safe. pic.twitter.com/njw2ffCoLT