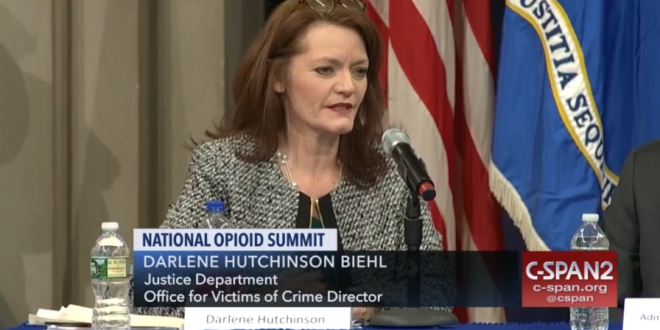 A Trump-appointed Justice Department official is accused of using social media to weed out Trump critics from the process for awarding grants to organizations that assist victims of crime.

A public employees union filed a complaint to the DOJ’s Inspector General against Office for Victims of Crime director Darlene Hutchinson Biehl—who leads the division that compensates crime victims and gives grants to local governments, nonprofits, and other crime organizations.

In an Aug. 16 complaint, the union alleged that Biehl was selecting peer reviewers—or experts hired by the department to ensure grants are given in a fair manner—based on their political views displayed on social media.

The complaint includes copies of internal documents showing lists of peer reviewers’ names with a column next to each in which Hutchinson Biehl made notes showing she had looked up people’s profiles on LinkedIn and Twitter. Some employees believe the rejection of some peer reviewers was primarily based on views expressed on social media, the complaint alleges.

A DOJ official who spoke on condition of anonymity said Hutchinson Biehl is screening peer reviewers and occasionally looking at social media profiles, but denied that she was making politically motivated decisions. In fiscal year 2018, the OVC awarded nearly $3.8 billion in grants, of which $313 million involved competitive grants that are examined by peer reviewers.