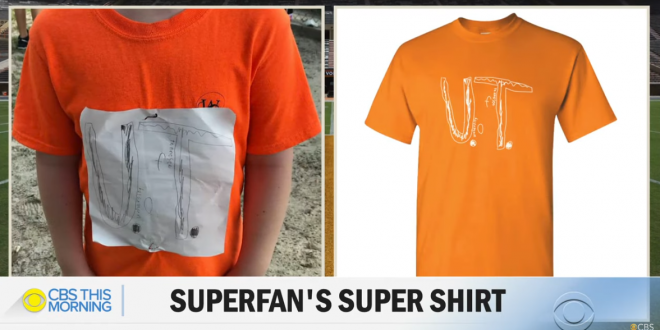 A Florida boy who was bullied and laughed at for his homemade T-shirt representing the University of Tennessee Volunteers at his elementary school’s college colors day has not only had his design made official by the university – but the demand for the product is so high that it crashed the school’s website.

It all started when Laura Snyder, the unnamed boy’s teacher at Altamonte Elementary School posted the story about the Tennessee-obsessed student. “This particular child came to me and told me that he wanted to wear a University of Tennessee shirt, but he didn’t have one. He told me every day leading up to it that he had an orange shirt that he was going to wear”, Snyder said in her post.

When the day finally came the boy showed up to school wearing his orange shirt with a piece of paper attached to it with his homemade design of the University of Tennessee logo drawn on. But when the boy went to lunch, things apparently took a turn for the worse.

Watch the clip for the great ending to this story.

The University of Tennessee is selling the fourth-grader’s shirt design and donating proceeds to combat bullying. https://t.co/m2ulZwsfrf

Previous Uber Fires Driver Who Kicked Out Lesbian Couple
Next REPORT: US Intel Pulled Spy From Russia Over Fear Trump Would Expose Him During Talks With Russians