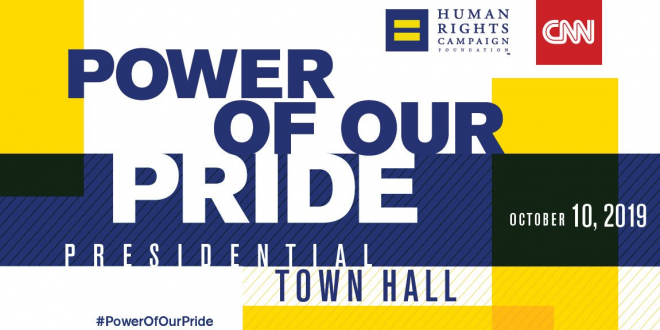 Today, HRC Foundation announced CNN as the exclusive broadcast partner for the organization’s LGBTQ-focused town hall for Democratic presidential candidates this fall. The evening will constitute the largest-ever audience for a Democratic presidential town hall devoted to lesbian, gay, bisexual, transgender and queer (LGBTQ) issues and will mark the first time in history that a major cable news network will air a presidential event devoted to issues of importance to the LGBTQ community. The Human Rights Campaign is the world’s largest LGBTQ civil rights organization, representing more than 3 million members and supporters.

This historic town hall event, entitled Power of Our Pride, will take place on Thursday, October 10 at The Novo in Los Angeles, California. The event is set to take place on the eve of the 31st annual National Coming Out Day, a celebration of coming out as lesbian, gay, bisexual, transgender, queer (LGBTQ) or as an ally. The first National Coming Out Day was held on October 11, 1988 on the first anniversary of the National March on Washington for Lesbian and Gay Rights as a way of celebrating the power of coming out and promoting a safe world for LGBTQ individuals to live truthfully and openly.

Previous Jacob Wohl Appears In CA Court On Felony Charge
Next Mayor Pete On #Sharpiegate: I Feel Sorry For Trump