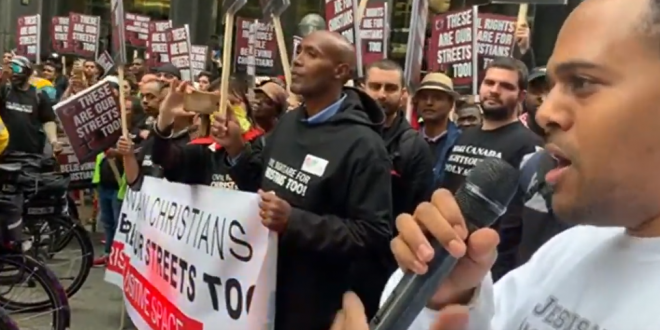 A rally promoting unity was held Saturday in response to an anti-LGBTQ Christian group’s march through the city’s gay village. A group of evangelicals, including street preacher David Lynn and longtime activist Charles McVety, marched up Church Street calling for the protection of free-speech and civil liberties.

The march was in response to several incidents this year where preachers, including Lynn, were detained after bringing loudspeakers into The Village and allegedly provoking fights with people nearby.

The LGBTQ community says the group is anti-gay, while the group argues that it merely disagrees with “many of the lifestyle choices of the LGBT community.” Police were at the rallies to try to prevent confrontations.

At the other end of Church St., the LGBTQ community gathered in the village for a counter-rally dubbed Unite For Love. It was peace, love and understanding in Barbara Hall Park, as Unite For Love brought out religious and political leaders to speak passionately about unity, equality, and conquering hate.

They gathered in response to a rally held by a Christian group known for anti-LGBT and anti-Muslim rhetoric. That rally featured evangelical street preacher David Lynn, who was arrested in June for creating havoc by preaching anti-LGBTQ  fire and brimstone in the village neighbourhood.

Mayor John Tory attended Unite For Love and spoke about saying no to the negative stigmatization of any other community. “We say yes to hope and understanding, to unity and to bringing people together and embracing each other, which I think is in the DNA of this city,” he said. “We’re all about bringing people together. That’s a hallmark of what Toronto is.”

The hate march is organized at Church and Esplanade. Signs were mass produced to hand out to everyone. pic.twitter.com/w1ECZbae4I

It seems like they were expecting a lot more people. pic.twitter.com/ljGheQWVXN

Pastor David Lynn says they just want some chicken from Chik-fil-a. His lawyer has been in touch with the super intendant to try and free up the road to let them pass. The are now chanting “Chik-fil-a”. pic.twitter.com/Xglxrajm98

An intended march by a Christian group holding signs that read “These are our streets too” into the heart of Toronto’s gay village Saturday stalled moments after it began. The city’s LGBTQ2S communities were ready for a showdown. https://t.co/g82gljku9c

Police continue to block our March with a baracade of bicycles and vans at Church and Front. Pro-LGBT agitators and Antifa opposing us, calling us haters and saying Christians have no place in Toronto. pic.twitter.com/nGeqWEzN2N

So proud of my colleagues, Bishop Kevin Robertson, Dean Stephen Vail and the parishioners of St. James Cathedral, Toronto for opposing the anti-gay Christian hate group marching through the Church St Village today in Toronto. pic.twitter.com/q37KzwQMNE

Previous New Polls: Joe Biden Far Out Front In SC, Tied In NV
Next Giuliani: I’ll Only Testify If Trump Tells Me To [VIDEO]