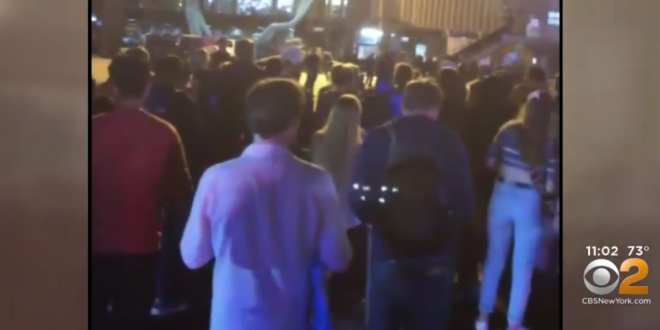 Panicked travelers abandoned carry-on bags and scrambled for the exits at a Newark Liberty International Airport terminal on Monday night, just as the busy three-day Labor Day weekend was drawing to a close.

An Alaska Airlines employee at Gate 30 in Terminal A grew suspicious of two male passengers as they were about to board a flight, according to Steve Coleman, a spokesman for the Port Authority of New York and New Jersey, which runs the airport.

The airline employee tried to confront the men and then pulled a fire alarm, which led to the evacuation around 8:30 p.m., the authorities said. It was not immediately clear what had prompted the flight attendant to be suspicious of the men, who were later questioned by the police and then allowed to board.

One passenger messaged with PIX11, saying “Imagine you’re starting to board and a frazzled flight attendant comes off the plane, stops the process, asks someone to call the police, then starts yelling (with increasing loudness) ‘evacuate!'”

“I ran with the crowds, hid under some seats, looked for an exit, headed out to the tarmac,” the passenger added. “Sounded like gun shots but after seeing the damage in this terminal, it’s more likely it was glass being shattered from people jumping. Terrifying.”

“Police and SWAT on premises and are working on clearing the terminal/area. Everyone near my gate seems to be calming down. Some folks are actually asking when we’re boarding.”

The panic was sparked around 8:30 p.m. after passengers in Terminal A, including some who were about to board their flights, were told to leave the airport by nervous airline attendants, people on social media claimed.

An official with Port Authority said that a flight attendant with Alaska Airlines approached two men at Gate 30. She grew concerned after talking with them, so she hit an alarm and told people to evacuate, the spokesman said.

Between 150-200 passengers quickly fled the area. Police were at the scene shortly after, as frightened flyers left the terminal so quickly many left behind their luggage, pictures and video showed. Some travelers evacuated onto the tarmac outside the airport’s gates.

#EWR It was determined that there was no threat in the Terminal A-3 Satellite. All passengers and employees are being rescreened as a precaution. [15]

Shooting scare at Newark Airport. Police arrived in seconds. We are all outside on the runway. Terrified . pic.twitter.com/WLDLKb4mKV

Insane situation here at Newark Airport. They just told us all to evacuate and whole terminal scattered. Bags left behind. I initially thought it was an active shooter. Maybe a bomb threat. Confusion and chaos pic.twitter.com/eEAJusrXK8

For anyone who cares, a 1 word false alarm (“evacuate!”) caused 300 of us at #newarkairport to dive behind desks, crash through glass, and sprint for our lives to the nearest exit. All instinct. America 2019 is constantly being prepared for a maniac with a gun to blow us away.

When the employee approached them, the men started running and she screamed “evacuate.” The yells stirred panic at the gate. https://t.co/SHvJTAlrAT

Previous IRELAND: Mike Pence Stays At Trump Resort At Trump’s “Suggestion,” Will Commute To His Meetings In Dublin
Next Trump Allies Fundraise To Investigate Reporters, Editors