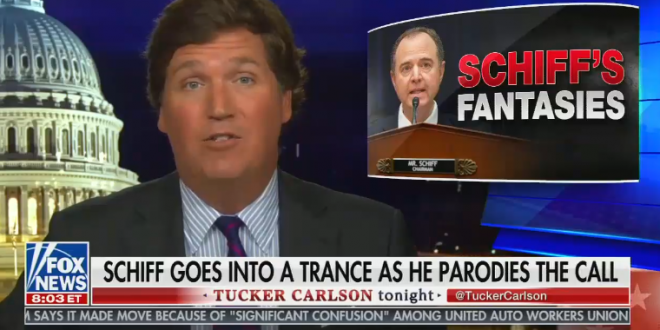 “Really, the prime example is the chairman of the House Intelligence Committee, Congressman Adam Schiff of Burbank, California. He recently went into a kind of trance and delivered his own prophetic version of what he believed must have happened between President Trump and the president of Ukraine.

“Keep in mind, that isn’t some guy babbling in the men’s room at Starbucks, that’s the man who chairs the mighty House Intelligence Committee. We trust him with our most sensitive information, and yet he is clearly — he’s demonstrably mentally ill, Adam Schiff is.” – Tucker Carlson.

Previous CDC Urges Against Vaping THC As Lung Disease Rises
Next Mitch McConnell: If The House Votes To Impeach Trump, The Senate “Has No Choice” But To Conduct His Trial