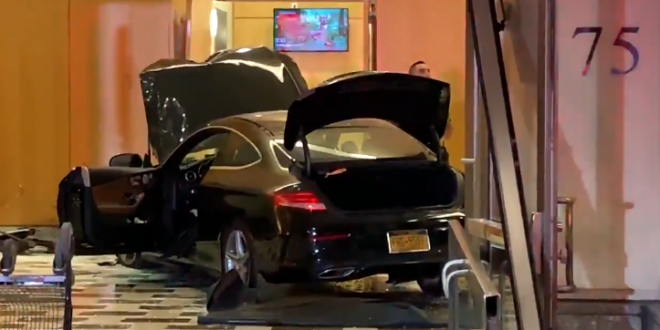 The wild incident unfolded at around 8:50 a.m. when the out-of-control black Mercedes-Benz slammed through the glass-door entrance of the 40-story luxury residential building on Huguenot Street and into the marble lobby.

A New Rochelle Police Department spokesman said the crash did not appear suspicious, but remains under investigation. Two pedestrians suffered minor injuries as a result of the wreck, the spokesman said.

The 40-story glass-and-concrete luxury residential tower, at 175 Huguenot Street, opened in 2007. When it opened, Donald J. Trump — speaking in front of his building, as fans cheered from passing cars and others lined up for his autograph — called the event a milestone in “the renaissance of New Rochelle.”

The building was developed by Louis R. Cappelli, the chairman and chief executive of Cappelli Enterprises. In 2005, he also developed Trump Tower at City Center, a 35-story condominium building in White Plains, just 10 miles from the plaza.

Workers at Trump Plaza New Rochelle say after car plowed into lobby, make driver got out and took a seat on a sofa. Said nothing. Several injuries but none are life threatening. pic.twitter.com/kJz1FRy5ra