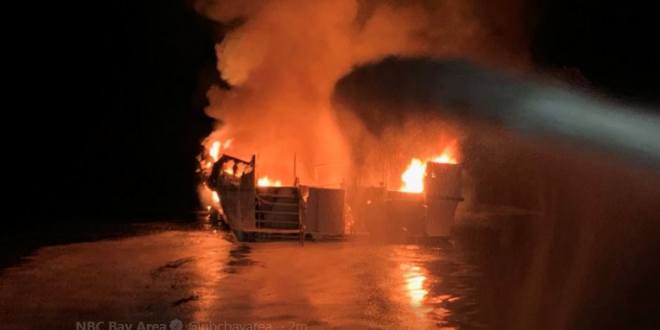 34 people are dead following a boat fire off the Ventura County coast early Monday morning, according to the Ventura County Fire Department. Initial reports said the U.S. Coast Guard had launched multiple rescue assets in conjunction with local agencies to assist more than 30 people in distress on a boat near Santa Cruz Island around around 4 a.m. In a tweet, the Coast Guard said “a group of crew members has been rescued (one with minor injuries) and efforts continue to evacuate the remaining passengers.”

CNN reports that the vessel is a commercial dive boat and that most passengers were apparently asleep when the fire broke out.

BREAKING: The Ventura County Fire Department has confirmed 34 fatalities in the incident https://t.co/IEgvYnPTZP

.@VCFD has released these photos of the boat on fire https://t.co/IEgvYnPTZP pic.twitter.com/YagNWuODHW

Previous Trump Rages About The “Crazy Lamestream Media”
Next 1100+ Flights Canceled, Airports Close Ahead Of Dorian