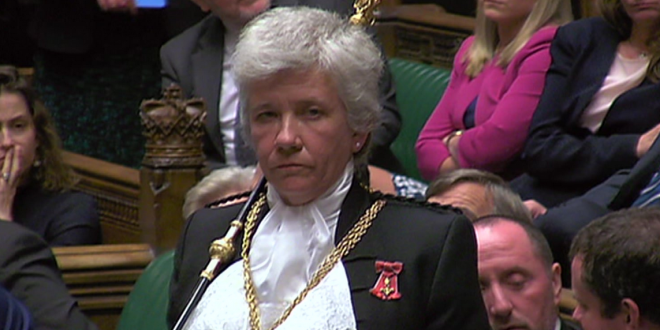 BRITAIN: Chaos And Furor As Parliament Is Suspended

There were extraordinary scenes of chaos and anger in the House of Commons overnight as opposition MPs staged a protest against the suspension of parliament for five weeks – a prorogation that the Speaker of the House said represented “an act of executive fiat”.

As John Bercow began proceedings to prorogue parliament, a group of opposition MPs carrying signs reading “silenced” drowned out Black Rod as she tried to address the Speaker, a ritual that initiates the suspension.

Several MPs were also involved in an altercation near the Speaker’s chair, as they attempted to prevent him leaving his seat and attending the House of Lords, the next step in the formalities required for the suspension of parliament.

The debates had already been raucous, but chaos really set in when Black Rod, a senior official in the upper chamber, the House of Lords, entered the House of Commons to request the presence of MPs for the prorogation ceremony.

The arrival of Black Rod — Sarah Clarke, the first woman to hold the post — was met with a wall of noise from lawmakers opposed to prorogation. A group of opposition MPs then advanced towards the Speaker’s chair and a small scuffle broke out.

MPs crowded around Speaker John Bercow, who had announced his resignation earlier on Monday, holding signs reading “Silenced.” Bercow then added to the drama with an extraordinary show of dissent, briefly refusing to heed Black Rod’s order to leave the Commons.

Just when you thought you were starting to understand British politics, something or someone called Black Rod enters the scene. https://t.co/uw9lVeQHlz

“This is not a normal prorogation” – Commons Speaker John Bercow makes his views clear as Parliament is prorogued until the middle of October pic.twitter.com/cVqKa9VDpj

John Bercow caves in and goes to the House of Lords with Black Rod.

Opposition MPs chant “shame on you” at Conservative MPs.

It is like a The Parliament of a war torn country #Prorogation pic.twitter.com/M0knK4QSjC

I don’t know who or what she is but I’m very into Black Rod’s Regency-era butch cosplay. She’s serving me unmarried Marchioness who secretly tops the genteel wives of British aristocrats whilst their husbands are fighting in the Napoleonic wars energy pic.twitter.com/ipVQTkdxSL

Protesters inside the Commons chamber hold up placards as Black Rod arrives to begin #prorogation proceedings. Bit of a scuffle around the Speaker’s chair. Quite literally all kicking off – at half 1 in the morning pic.twitter.com/CXCSEC4ZVQ

VIDEO | Watch Sarah Clarke, Lady Usher of the Black Rod, summon the House of Commons to the House of Lords to hear the Royal Commission.#Prorogation pic.twitter.com/5tQd2o6XtX